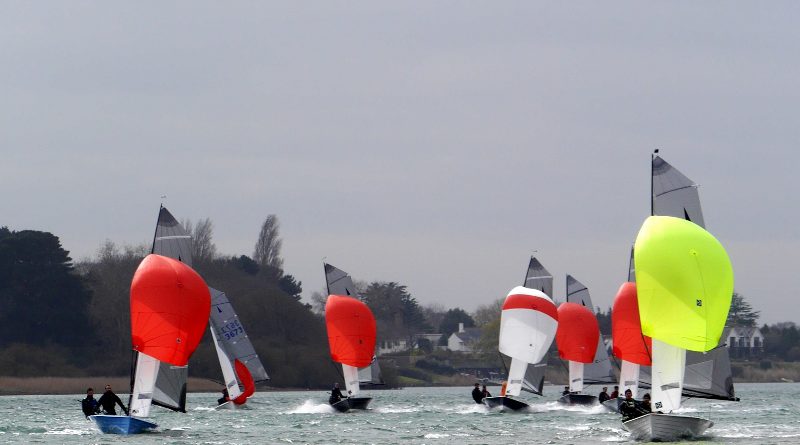 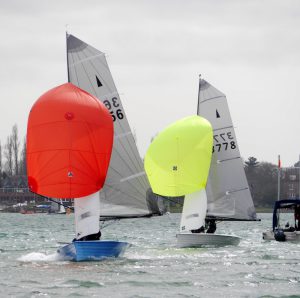 Easter weekend brought a heavy wind forecast from Easter Saturday onwards. Saturday was forecast to be F5-7. On the day a decision was made to run the racing starting with wind at 22 Knots. Race Officer Pete Harrison set a triangle / sausage course, and the eight Merlin Rockets who had braved the conditions started racing. With a few capsizes there were some breakages. Pete Harrison ran the 3 races back to back, aiming and managing to finish just before the forecast wind & weather deterioration. Overall an excellent days racing was had.

Some excellent spectator viewing was had from the clubhouse, where in all races fingers of gusts fanned out in water from over the clubhouse roof although the relative shelter of Chichester Basin did provide reasonably flat water.

In Race 1, three boats hoisted spinnakers on the first reach. Chris Gould & Chris Kilsby screamed into the lead just after the windward mark. Hoisting their spinnaker they then went swimming. The rest tacked round at the mark. On the first downwind leg all the boats hoisted, their spinnakers. Most managed to keep going when a squall hit. One took a pragmatic approach to the squall dropping their kite tacking round half way down the reach to avoid a capsize in the squall. The boats initially very close started to get well spread out on third beat. Ollie Turner & Graham Sexton (Starcross SC) took the lead from first windward mark, retaining it throughout the rest of the race. William Warren & Mark Oakley (Shoreham SC) retired with a fractured gooseneck. 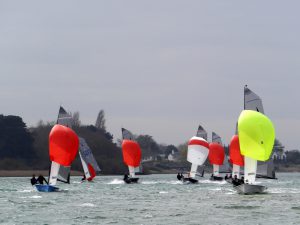 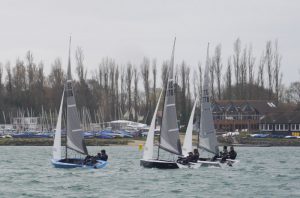 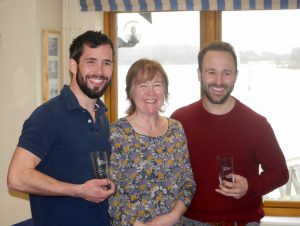 Thank you to the committee boat team, and safetyboat helms & crews and tea bar. Special thanks to Laurie Winther for race notes.