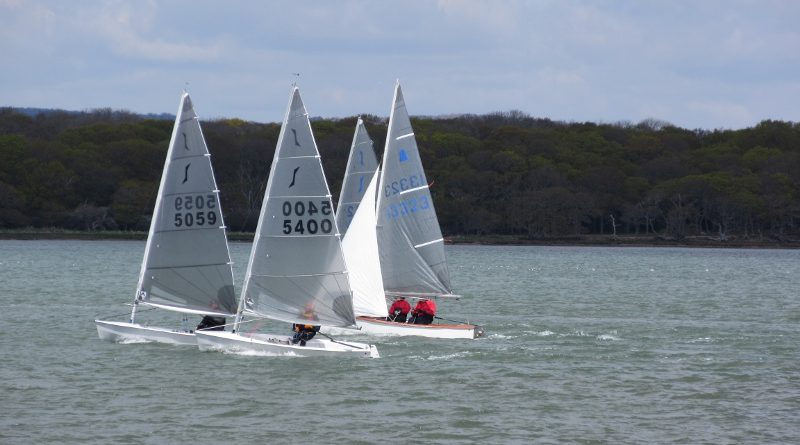 The first of Chichester Yacht Clubs new weekend series – The Spring Fling– was held last weekend. The series was planned as an early season taster hoping for some fine spring wind and weather. It was certainly fine but there was a stiff northerly breeze which proved to be both fluky and variable. Despite unseasonably chilly air & water temperatures there was a good turnout in the Fast/ Modern & Classic/Medium fleets.

In the Fast/Modern fleet Saturday’s racing was led off by Phil Allen in his International Canoe. Phil speeded round the course, showing his skill in this single handed asymmetric spinnaker boat. Despite his amazing turn of speed on handicap he dropped down the leader board on handicap while Nick & Roger Elliman in their RS400 showed their expertise with 3 first places leading at the end of Day 1 with Chris Hodge & Louise Varley (2000) in second place, just ahead of Helen & Mark Green also in a 2000. On Day 2 Chris & Louise took two first places on handicap from the Ellimans, with the Ellimans getting a final first place in the last race.

The Classic/Medium fleet saw a large turnout of Solos, alongside Lasers & a Europe. The only two man boat was a GP14. In Race 1 Charlie Porter, was the only boat to complete 3 laps and took first, in Race 2 the Colbournes back from warmer racing in Caribbean getting back into cooler British racing had a fast race and were first. Ian Payne got the best of the wind to get well ahead on the water in Race 3 to take first place. Day 2 left all to play for in the places. Charlie Porter took another two first places with the Colbournes wining the final race. Ian Lissamore having been Officer of the Day on Saturday sneaked in 3 second places in his Solo. Final places 1st Charlie Porter – Laser, 2nd Nick & Biddy Colbourne – GP14, 3rd Ian Lissamore – Solo, 4th Ian Payne – Laser.

In the Slow Fleet Susannah Olliff & Ella Brocks were the sole competitors only competing on Day 2 –with 3 firsts in their RS Feva.