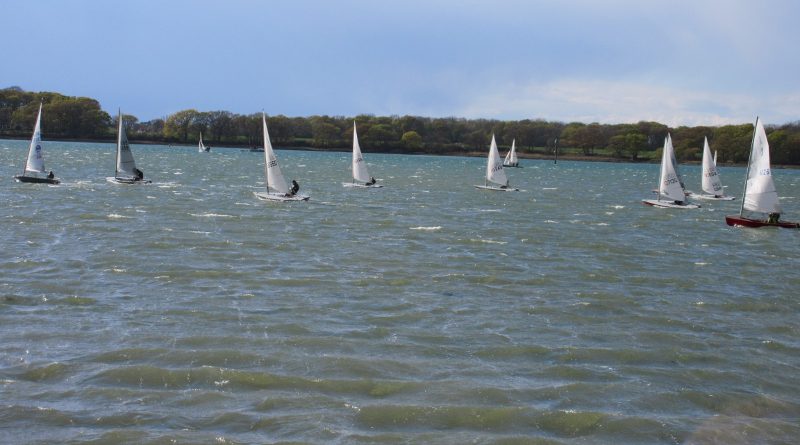 With a late tide, and a clement wind forecast, there was a good turnout of regular racers  for races 5& 6 of the First Breath series. Some of the competitors were fresh from a day on an RYA rules advisor course – and Chichester YC now has 14 new rules advisers!. Despite the forecast, an hour before racing there was no wind! Race officer Ras Turner waited for the predicted F4 to arrive – and arrive it did. Thus racing got underway.

Unfortunately black clouds heralding a squall could be seen in the distance. The squall appeared – but the sudden and sustained gusts of F7 were something of a surprise, bringing a rash of capsizes. Some of the wiser competitors headed for the shore.  With a continuing heavy wind the race was shortened after one lap while the rescue boats ensured all sailors & boats were safely returned to shore. 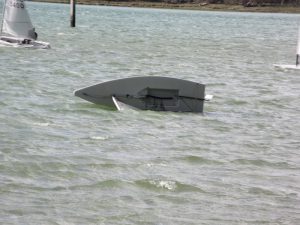 Special thanks are due to Stephen Green and Lucy Boreham for launching an extra rescue boats, and to Roger Millett, Derek Jackman and Ian Payne, as well as some Topper parents, and bystanders, and the Marina office who helped a capsized sailor onto the waiting pontoon. The wind did not abate and racing as abandoned with most sailors staying for a jolly sailors supper in the restaurant swapping capsize stories!

In the Fast/Modern Fleet Michel & Paula Olliff took first ahead of Helen & Mark Green in 2000 – the only finishers. In the Classic/Medium Fleet Martin Orton in a Laser was fastest on the water, but was beaten into second by Tim Boon in a Laser Radial with Mark Harper (Solo) 3rd.