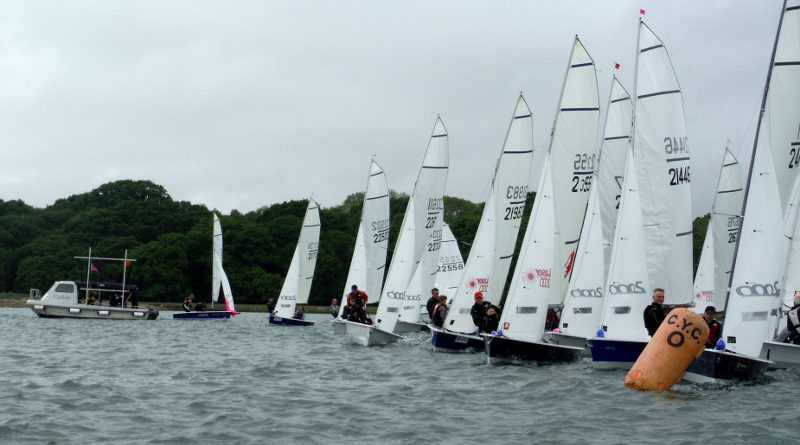 Chichester Yacht Club hosted the second 2000 Millennium Series event of 2016 last weekend. The quality of racing at the front of the fleet has intensified this year, with a number of boats competing for the honours. 20 boats from across the south joined in the fun weekend.

Charles Porter the CYC race officer set a Windward–Leeward course between Copperas point and Birdham to make full use of the southerly winds. The course presented all the challenges that Chichester can offer, tide, trees, weed, and harbour traffic! 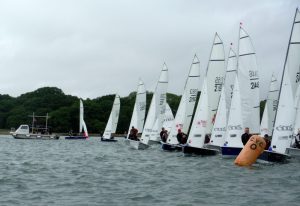 Day 1 offered poor weather for anything except sailing, with grey skies and occasional showers. But with a good F4 wind there was some close racing. After the first beat on the first race, there was a significant wind shift, the race officer signalled a change of mark position and moved the windward mark, allowing racing to continue on a much improved beat. The second race had a general recall as the fleet pressed the line and some misjudged the tide. Race 3 had the best wind of the day with the weather deteriorating into the promised rain showers. At the end of the day Rob and Katie Burridge (Weir Wood SC) had won all 3 races.

Sunday was a much nicer day, sunshine and almost warm – but with less wind. Race officer Charles Porter delayed the start of racing for 30 minutes in order for the tide and the wind to set. The fleet appeared very relaxed drinking tea on the patio in the warm sunshine while waiting for the wind….

When racing started the breeze was consistent and from a more south-westerly direction. 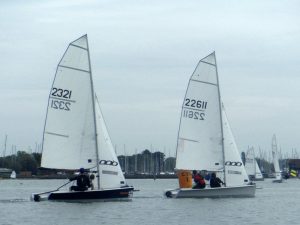 In Race 4 Fergus Barnham and Serena de Nahlik (Snettisham Beach SC) led the race from start to finish. Race 5 saw Rob and Katie Burridge return to their winning ways. For Race 6 the race officer flew the black flag to ensure a timely start, due to the tide pushing boats across the start line. Unfortunately this led to a few Black Flag Disqualifications. For many the final race was the best racing of the weekend, with many boats competing for top places in the first beat. In the end it was Matt Sargent and his expert spinny flying son Johnny (ASA/Thorney Island SC) who crossed the line first.

At the end of the two days the clear winners were Rob and Katie Burridge who had won four of the six races, but they had to work hard to get the results in some cases fighting their way through the fleet to come out in the lead. 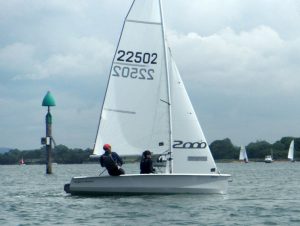 After the results were calculated there were four boats tied on 24 points competing for the fourth place, showing that the top of the fleet had some very close racing.

A prize giving and regatta tea followed the racing, with some additional prizes being awarded of vouchers /prizes from LDC. 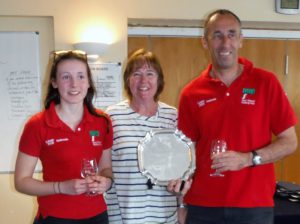 The Endeavour prize for the last placed boat that completed all 6 races was won by CYC’s Rick Page and Ian Sellwood.