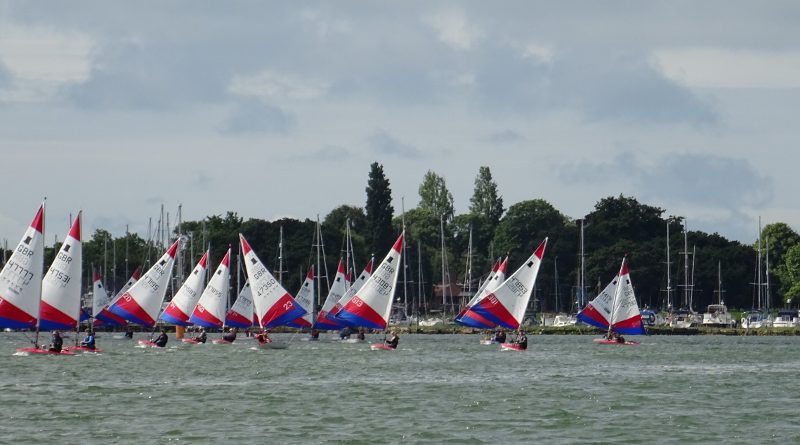 With a forecast for a bright sunny day with a Force 3 wind in the South West conditions were looking near perfect for the Chichester YC Topper Open – attracting 33 boats. In the end the weather did not quite match up to perfect! But it was a really good sailing day despite less than forecast sun. Three races were held, between the second and third races, a F4 blew up capsizing a few boats, but then the wind dropped to F1-2 at the end of the Race 3, giving those good in light airs the advantage. 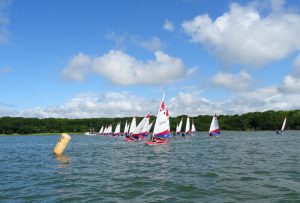 With this wind direction a trapezoidal course was set in Chichester Basin. Both ‘full rig’ 5.3 and the smaller 4.2 rig Toppers took part. The 4.2 rig Toppers doing a shorter course. Some quite new to sailing members of Chichester and other clubs joined in the racing and were able to improve their skills considerably. This included one 4.2 sailor who was able to keep up with some the bigger rigged Toppers.

Races 1 & 2 had clean starts with no recalls. In Race 3, however, there were three boats over the line – they were recalled but only one returned, even this boat did not return immediately so was a long way behind the fleet. In the first two races with the tide coming in against the sailors the leaders did best going up the right side of the beat. Once the tide was ebbing, the windward mark was shifted left, the majority of the sailors still went right, which interestingly still seemed to work. 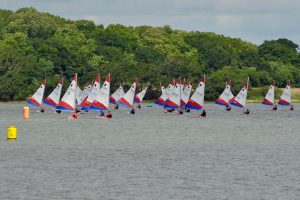 There was some serious and hard fought competition at the front of the Fleet with Race 1 being won by Hugo Burrows, (WOSC), with Morgan Archer (Blue Circle SC) second. In Race 2 first place went to Sophie Kirk with Hugo second. Race 3 was won by Ischbel Zuurmond (MRSC) with Charlie South (Stokes Bay) second). 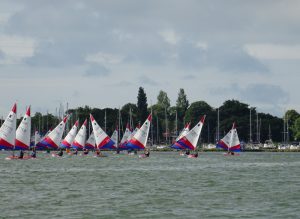