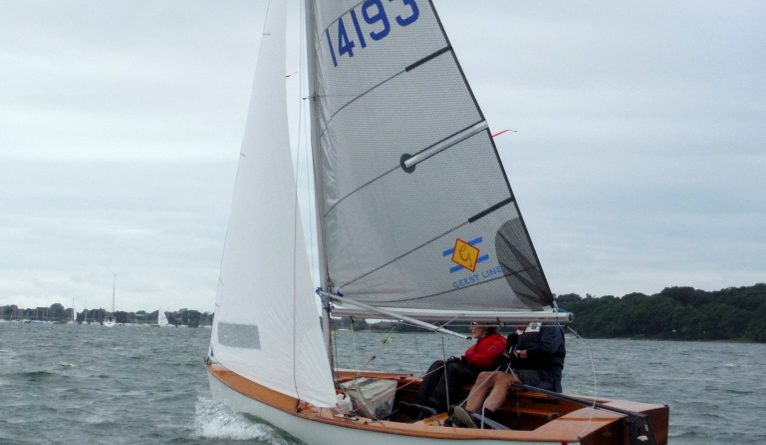 The Chichester Yacht Club Up the Creek Race involves the challenge of getting round a mark at the top of all the creeks in Chichester Harbour. This is an exciting race and it is such a pleasure to visit all these lovely places. Biddy Colbourne reports this is her favourite race.

Saturday was a perfect day! One of the best we have had for this race. The sun shone, there was a good tide and a lovely breeze – strong enough to keep the boats whizzing along but not so much that sailors were worrying about falling in!

Nine intrepid crews signed on and set off on a rising tide. (Many CYC sailors were also cheering on Ben Ainslie in the Americas Cup trials in Portsmouth)  Fishbourne mark wa 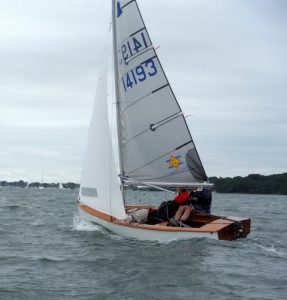 s removed from the Races as Dell Quay had an open meeting. The marks in this race can be done in different orders, so not all the boats are going the same way at the same time.

The Colbourne’s set off in their GP14 fetching up the Itchenor reach and cutting the corner at the bottom of the Bosham channel bumping along the bottom with centre-board & rudder raised! There was the usual search to find Quay mark. Here Tony Purser (RS600) had a slight problem when he hit the mark and capsized trying to do his turns! The tide was wooshing out as the boats beat back from Bosham, dodging the anchored yachts, racing day boats and Picos sailing from Cobnor, making it back to the main channel with some relief!

Nick & Biddy Colbourne in their GP14

A long beat up to East Head m ark followed – very sploshy as the wind and waves picked up. Some boats left the Thorney channel preferring to go up this on the way back. Others went up the Thorney channel next. A fetch across to find the elusive SW Pilsey mark, followed where the sailors were pleased to see David Culver and Stephen Green anchored in a safety RIB counting the boats out and back. There was a flat out reach all the way up to Church mark at Emsworth (another difficult to spot mark!), allowing spinnakers to be flown. Team Colbourne managed to pass Ian Payne in his Laser and Helen & Mark Green in their 2000 on their way back.

Once round Church mark there was a long fetch back to Freddie Brookes mark. The Colbourne’s headed to round the mark only to find that it was the wrong mark and was a yellow inflatable being rounded by a large fleet of RS200s, who were a little offended at having a GP14 in their midst! Team Colbourne managed to keep out of the way of the RS200 Fleet and finally found the right mark. They then headed off to for a spinnaker run to Thorney. The tide had got much stronger in the time taken to get to the mark, so timing was everything.

Finally there was a spinnaker run back to Chichester YC allowing a good speed against the tide. The GP14 finished with the 2000 of team Green – quite a nice way to finish after over 4 hours and about 25 miles.

The results were amazingly close. 1st Nick & Biddy Colbourne (GP14). Ian Payne (Laser) was second beating Phil Allen (International Canoe) by about a minute. Tony Purser (RS600) only a couple of minutes behind in spite of his capsize. The Greens were 5th and Ian Farr in another 2000 finished 6th.

It was a great day but tiring. Many thanks to Nigel Cowan for being such an efficient Race Officer and to the safety boats who sat out on the water for such a long time.