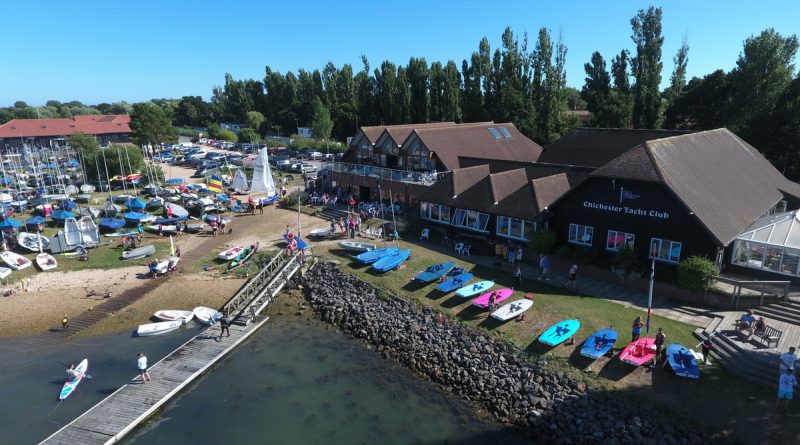 Chichester Yacht Club Dinghy Week is a wonderful eclectic mix of racing for the experienced of all ages, together with start racing fun coaching for less experienced youth sailors, and RYA learn to sail for novice youth sailors. Each days sailing is followed by games on the lawn aimed at children but joined in with by all ages! This years games included capturing balls lying on a skateboard (yes really), a water slide on the lawn, and balloon water bombs – which were a spectacular hit in all senses of the word. 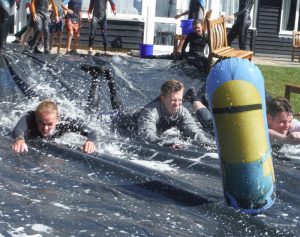 The Star in Reasonably priced Topper competition was marred by a mast breakage – but won by Marin Orton.

The 21 sailors in the Start to Race Fun Fleet had an exciting week with Force 4-5 every day making it hard work and tiring, but the sheltered waters of Chichester Basin, as well as the ability to sail in in the very sheltered lee of the CYC club house made this manageable. This enabled some fantastic improvement during the week. 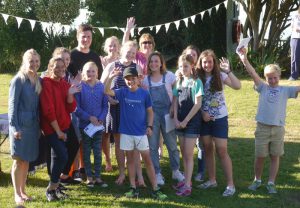 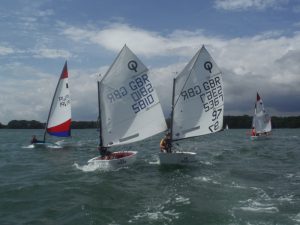 On the final day (Day 5) all the youngsters joined in a Turbo Regatta. Fast and furious – managed by Martin & Cindy Orton

-this involved lots of short races, but with added forfeits, sailing backwards, and even standing on one leg on their boats!

The winner of the Turbo Regatta was Anna Fenning, and the first Optimist with some fantastic starts was Thomas Dempsey. 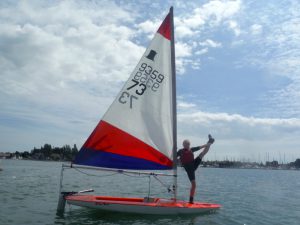 The 17 youngsters doing the RYA Learn to Sail did amazingly well in the tricky conditions. Again the sheltered and clear sailing area was of real value. They were well supported by their instructors, led by Liz Chowienczyk, All achieved RYA qualifications ranging from RYA Stage 1 – Stage 3.

In the main racing fleet during the week over 40 boats and about 60 sailors took part in the racing. The week started in a stiff F4 gusting F5, which continued throughout the week. This led to some exciting racing throughout the three fleets. Race office Pete Harrison ran the 4 day series from Committee boat Cyclone, in an efficient manner with enjoyable courses.

In the Fast /Modern Fleet Day 1, Tuesday was led throughout by Alex & Steph Orton in their 29er, winning both races on the water & on handicap, but that was their only day in the Fast Fleet. Day 2 was breezier building to 20 gusting up to 30K, so one for the heavy wind sailors. While some retired to the beach & sunshine, Nick & Roger Elliman in the RS400 had a 1st & a 3rd, with Michael & Paula Olliff in their 2000 a 1st & a 4th taking them into the lead. The latter race also presented challenging conditions for the safety boat team who worked hard with a lot of capsizes. The breezy conditions continued on Thursday & top of the scoreboard again dominated by team Olliff, with Nigel Skudder & Keith Hills (Hornet) also taking a first place. On Friday Race 7 was calmer, but not Race 8. Martin & Cindy Orton in a borrowed 2000 were by then well into their stride taking two 1st places. 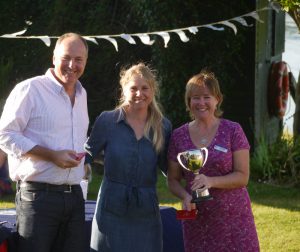 The Medium/Classic Fleet were joined by 12 year old Charlie South (Stokes Bay SC) in his Topper, after some serious competition. While he certainly had some competition, Charlie who was only able to compete on 3 days took three 1st places, his lowest place being a 3rd. 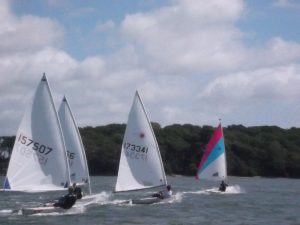 He was pushed hard throughout by Connie Hill, also a youth sailor in a Laser 4.7 (Bough Beech SC). Ian Lissamore in his Solo (CYC) and Alex Orton (Laser) CYC both had some high places and a first place each.

In the Slow Fleet all the sailors were out for fun while racing. The most fun seemed to be had by Cat Albone & Eliza South in their RS Feva, which they have just stated sailing, having been sailing Toppers. They seemed to be talking and laughing throughout. The week was won by Matthew Carr in his Topaz (CYC) who had 1st or 2nd places throughout. Meryl Deane & Jo Dipple also managed a couple of 1st places to take 2nd, with Andy & Ted Palmer-Felgate winning every race they entered were 3rd overall as Andy was also sailing a laser in the Medium Fleet. Ted was, however the youngest crew by a large margin

Day 5 in the main fleet was a Pursuit Race, with again some windy conditions. This brought some spectacular turns of speed from some of the later starting boats with the RS400s and the International Canoe speeding along, catching up many in their path. However, the days racing was won by Ian & Tracy Ellerington, in a Laser 3000, the breeze suiting their trapeze boat. This was a stunning result for yacht sailors who only occasionally race their dinghy.

A prize-giving followed on the Chichester YC Lawn. Sailors were thrilled to have their prizes presented by CYC member, Olympic double Gold Medallist and World Sailor of the Year Sarah Ayton.

Thanks are due to all the many people who helped throughout the week. Special thanks to Dinghy Rear Commodore Paula Olliff who organised and ran the week.