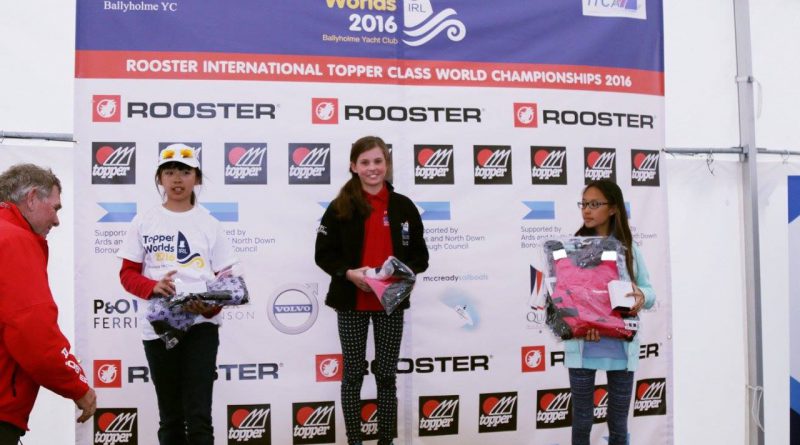 Hello my name is Catherine Albone and this year I took part in the Topper World Championships at Ballyhollme Yacht Club in Northern Ireland. The venue was nice and the club very friendly, however the launching wasn’t very quick as the slipways could only fit two boats side by side on them. This was particularly annoying for me on the first day when I was right at the back of the slip way and I couldn’t get to the front. The wind was good on Monday and I posted all top ten results, although that was good, I was even happier making friends with all of the Irish girls and a Macau sailor. I don’t really have a favourite part of the week but one of them is that my sister Beth, mummy Sharon and me Catherine would take the ribs back to the marina and have a nice warm shower there and then walk all the way back to the club house. On one trip to the marina a little cute seal came to play with us. Most of the days the winds were the same as Monday (light which was good for me), however on Thursday there was thick fog so after one race we went back in on tow. On Friday the 4.2 fleet did not go out due to heavy winds and massive waves. This was good for me as I was 5th and first girl!
On Friday when after all the thankyous where done I was finally officially female 4.2 world champion, but also 5th in the world. I was very happy and hugging all of my family and family friends as well as my friends who I had made. It was a very exhausting week for me and all of the 36 4.2 competitors but for me it was worth it! I would like to thank Rooster and all the other sponsors as I won some great prizes! 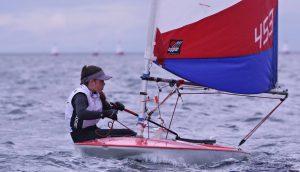