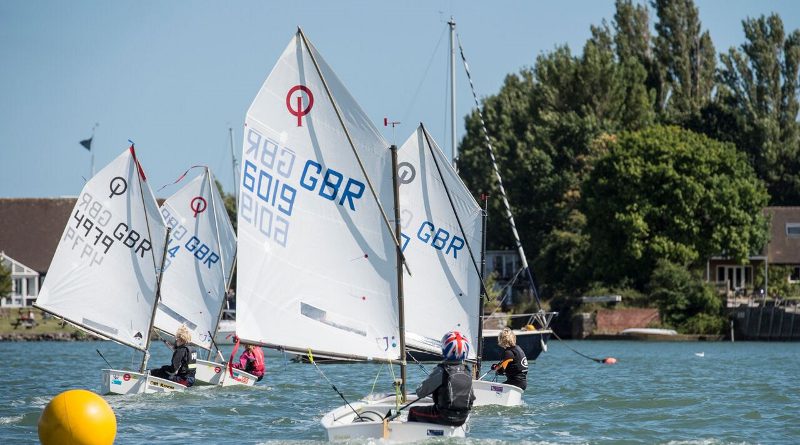 38 Optimists, a near record number, attended the Optimist Open at Chichester Yacht Club on Sunday 21st August. The forecast was for a south-westerly Force 5/6 in the morning to drop to a more manageable Force 4/5 by 13.00 for the first start. For once, as predicted, the wind had settled to 18-20 knots for the first start. The high spring tide was also major factor for race tactics.

The entries were split into two fleets of roughly equal numbers with 18 sailors in the Main Fleet and 19 in the Regatta fleet, where some coaching was available for the less experienced sailors.

Both courses were in the beautiful Chichester Lake with the Main Fleet positioned in the slightly windier main channel and the Regatta Fleets course being positioned in a more sheltered area closer to the Clubhouse.

Regatta Fleet: The Regatta Fleet got off to a good first start, the young sailors coping well with the breezy conditions. There were a few capsizes with boats being righted competently by the enthusiastic youngsters – followed by frantic bailing!. Where the sailors were unable to get going the coaches and safety boats were on hand to help out and ensure that a great experience was had by everyone. 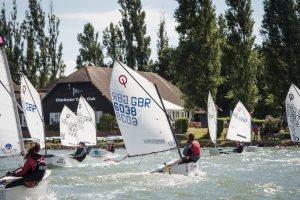 In the three races for the Regatta Fleet Samuel Griffiths Oliver Baddeley and Ella Lightbody battled throughout over the first three places. Samuel Griffiths showed particularly good boat handling skills at the leeward mark where he made up places in several of the races.

Main Fleet : In the Main Fleet there was some very close racing at the front of the fleet with national squad sailors, James Foster, Henry Chandler and Oliver Evans trading places in the strong breeze. International competition came from the Belgium boat of Luca Hutchings. Going into the final race any of the top three could win, there was a general recall as the tide was now pushing the boats over the line, The wind also increased to 20 knots with some exciting gusts. Race position depended on keeping the boat flat and dry. There were some very determined and brave performances from the lighter sailors with a few capsizes and nose dives. 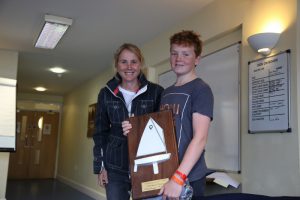 Overall it was a shifty, gusty and tidal event that gave everyone some good and fun racing. 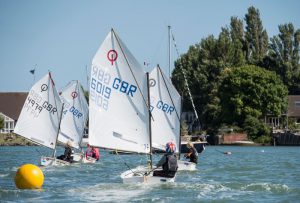