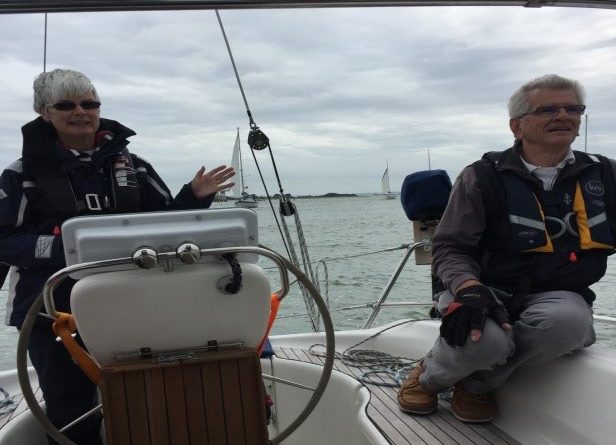 At recent meetings of the Yachtie Ladies, a number of our members agreed that they would like some time on the water to improve their boat handling competence, particularly in case something happened to their other half and they were left to deal with the situation by themselves.

Three ladies made their way to Universal marina on the Hamble and met up with Ian Culley where he keeps his yacht “Another Fantasy”. Ian is a qualified yachtmaster instructor so we were in good hands. The plan for the day was for us to learn how to cope in an emergency.

In the morning it was too breezy to go out but we went on board and discussed what safety equipment we should have both for ourselves and on the boat.

After lunch the wind eased and we went out into Southampton water for a practical session. It was still somewhat windy gusting F5 at times. But we practised MOB. The yacht was stopped quickly by depowering the mainsail and heaving to. The engine was started and sails furled. The casualty (a fender) was brought alongside within 5 minutes. This manoeuvre seemed to be very effective but we were all determined now to go and practise this on our own yachts.

A big THANK YOU to Judy Walker for arranging the sessions and to Ian for his time and expertise. Such a useful day!

Several other dates for Ladies on the Water had been arranged but unfortunately they had to be cancelled due to unsuitable weather, but it is hoped to offer some further sessions for ladies later in the summer.