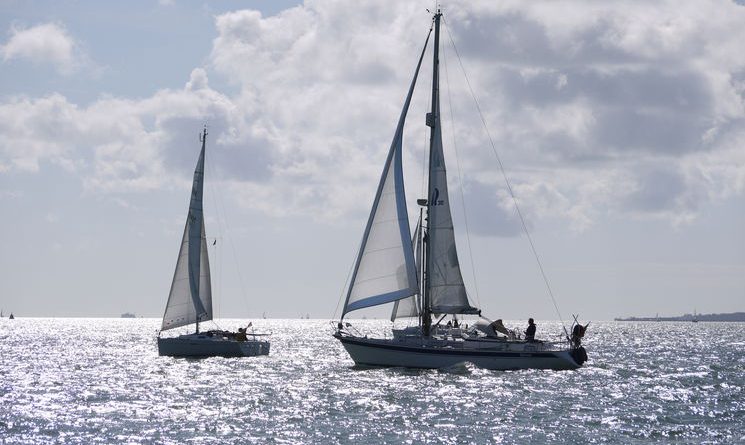 Well, the Yacht Section Fun Race Series got off to a fairly chaotic start on the 13th May!

But we were all keen to make sure it went ahead, as this was to be the first running of the Peter Buttery Trophy – kindly donated by Jean – to be awarded for the combined out & return legs of this competitive cruise to Cowes.

The committee boat, Revelation & our RC in Bugsy 2 were a bit slow getting out of Birdham Pool before slogging down the Harbour against the incoming tide. So we delayed the start for 15 minutes, so that we could get there – always a good idea if you are in charge of the start!

I’m pretty sure regular Fun Race competitors: Crayzee Feeling, Kerenza, First Light, & Molly Oxford; & new entrants Uforia were all there waiting for me. Only then did we find another boat anchored (CCRC taking priority by being there first, apparently) just where we would normally organise our rolling start. A bit of “quick thinking” led me to change direction for our start line – which no doubt caught out one or two? But nevertheless, we all headed off in roughly the right direction for Cowes, into a fairly stiff SW-erly wind, but bright occasionally sunny weather.

A couple of tacks were needed to get round the course marks, before settling down to a long beat from No Man’s Land Fort to the finish at Royal London YC buoy, a couple of hours later. To be honest, I didn’t see much of the rest of the fleet from soon after the start, but we all arrived safely in Cowes Yacht Haven by mid-afternoon.

For the rest of the afternoon, some gentle spectator sport was had watching the Sunsail crews park their boats – with varying degrees of success? The pontoon party followed – with the announcement of the race results: 3rd – Crayzee Feeling; 2nd – Kerenza; 1st – Bugsy 2. Uforia came a very creditable 4th on their first outing with our very competitive fun racing group!

Then we all repaired to the Anchor for a very convivial group meal, “enhanced” by live music in the adjoining bar – if you like that sort of thing. I do…

On Sunday, the return leg started at a relaxed 0930, at the Royal London buoy. With a big tide pushing us in the direction of Chichester, the committee boat struggled to be in the right place, or to manage the countdown terrible accurately! Sorry everyone. I may get better with practice?

But we did all get going, with the fleet splitting several ways: bigger boats in front, smaller ones behind. Then we split again, some for the Forts & some for the gap in the submarine barrier. In spite of this, the two groups were still close by the time the finish at Chi Buoy came into sight. This time, our wonderful handicapping system came into play (thank you Steve): 3rd – First Light; 2nd – Bugsy 2; 1st – Revelation.

That made David & Gill in Bugsy 2 the worthy first winners of the Peter Buttery Trophy.

From conversations afterward, we all thoroughly enjoyed the slightly competitive element to this style of cruising, especially some close(ish) encounters, even after choosing those completely different routes down the Eastern Solent. If it appeals, please sign up for the next Fun Race: Round the Island (via Lymington) on the 8th/9th July.