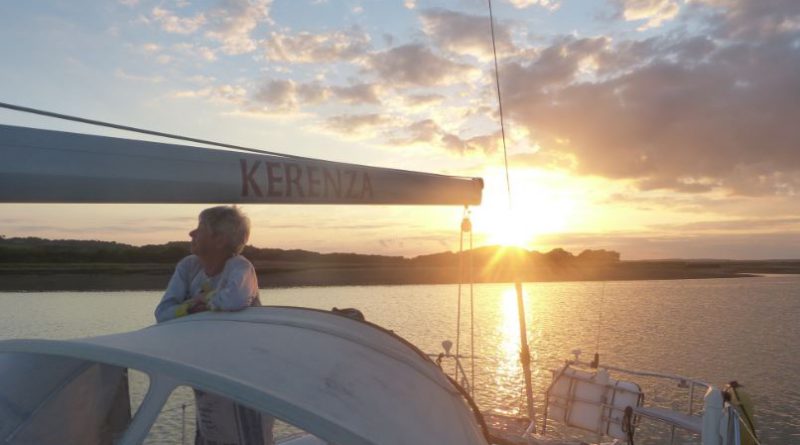 Tuesday’s forecast was SW 4/5, gusting 6. The late morning start coincided with rain which had a determined look. So Kerenza hoisted the iron topsail and headed for Swanwick! GilliAnne and Resonate proved to be true sailors and tacked to the Forts and then enjoyed (?) a wet sail arriving damp and dishevelled at Swanwick in the afternoon. The pontoon party was held in Kerenza’s saloon followed by supper at the Boathouse.

A table had been booked for lunch the next day at The Hut, Colwell Bay. As it was Springs we decided that with a flood tide through Hurst Narrows we might not arrive before teatime so the idea was abandoned. Pity because the menu looks good and The Hut has a launch to pick up diners from the anchorage.

As a result we had a gentle sail to Newtown Creek. Safely moored the trio launched their tenders at 16.00 UTC and motored up Western Haven, described by Ken Endean as “a marvellous tranquil creek”. This was the ideal spot for our new style pontoon party! Baby Kerenza dropped an anchor and we rafted up producing a sumptuous feast of drinks and nibbles. A little wobbly but voted by all a great idea. Indeed it was suggested that CYC should go for a dinghy raft up record in the Guinness Book of Records……100 or more in Chichester Harbour?

On Thursday the wind lived up to its reputation turning East! But it veered during the day to the South and was force 4 rather than the forecast 2/3. We enjoyed a beat down the Eastern Solent tacking with a race fleet of Classic yachts arriving at CHI mid-afternoon in the sunshine.

It was fun to meet new members Geoff and Gill, also Wendy and Craig who are new to us but well known to many CYC vets!