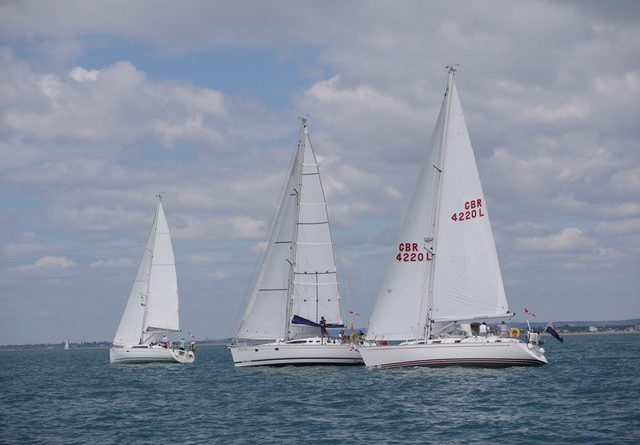 The winds predicted for the 8th July were “variable” to say the least. Depending on which website was consulted, anything from easterly & almost calm; to a south-westerly Force 3 could be expected.

As the time for the start at 1200 approached, however, there was certainly enough wind to get all nine competing boats going well, towards the Forts.

We missed Chris Lane & crew, as unfortunately for Molly Oxford, she had a last-minute engine electrical failure & did not make it out of the marina; but Avalon of Hamble, Bugsy 2, Crayzee Feeling, Kerenza, Resonate, Sapphire, Sigridur & Ursa Minor all made it to the start in ample time. Even committee boat Revelation was there in plenty time to have a few practice runs up to the start. It didn’t do much to improve my radio announcements though!

Nevertheless, all boats made a good clean start, & the wind strength was sustained long enough to keep nearly all of us sailing all the way to Lymington. Once past the Forts, the reasonably close quarters fleet split to go north or south of the Bramble bank – with the southern route turning out to be the better choice. As often happens, Kerenza took “line honours”. On this occasion – by a mere 10 seconds from Resonate, who had opted for the northern route.

Once all CYC boats were safely on Dan Bran pontoon, the pontoon party started – all too soon for me, as I rushed the results calculations, & announced that Crayzee Feeling was the winner, with Resonate, Kerenza, Sapphire, & Revelation taking the rest of the classified places.  All other boats retired.

Royal Lymington YC provided an excellent venue for our group meal, though with a VERY early start the next day, most crews decided on an early night.

Maybe it was the 0330 wake-up & 0530 scheduled start at Bridge Buoy that reduced the fun-racing field to four boats on Sunday? Though Bugsy 2 & Sapphire had decided to head for France or the Channel Islands as soon as weather permitted.

There was no wind at 0530, so we all decided to motor towards St Cat’s. By 7am, we were all sailing, so I called a “rolling” start – which seemed to go well. Resonate & Kerenza immediately started to pull away in front, but Crayzee Feeling decided to keep Revelation close by, until “the wind settled into a bit of a groove on Sunday, we (Crayzee Feeling) really enjoyed getting our large spinnaker out and squeezing the most we could out of the light breeze.” That is a HUGE spinnaker! I thought Crayzee Feeling had started motor-sailing!

Resonate claims to have “had our patience tested with no wind for sometime around St. Catherine’s Point, I was having difficulty pointing in the right direction at one time with the swirling waters taking over!” but that didn’t stop her pulling out a significant lead.

The final results for the fun-races at the weekend: for the outward leg, Steve Cray was very gracious, in agreeing that Crayzee Feeling’s first leg result seemed to-good-to-be-true & turned out to be just that!

The result was that Resonate & Kerenza were promoted by a place – to First & Second respectively, & Crayzee Feeling was classified 3rd on that leg. 4th & 5th remained as was.

On Sunday, the handicap results were: 1st – Resonate; 2nd – Revelation; 3rd – Crayzee Feeling; 4th – Kerenza. “Official” results sheet will be on the Notice Board – if you are interested in the detail.

So hearty congratulations to Resonate for a clean sweep of all the silverware associated with this weekend! The Cuff Miller Trophy for Leg 1; the Harding Trophy for Leg 2; & Winner of Round the Island Trophy too! I do hope Wendy & Craig McGuinnes will be here to collect them at the Laying Up Supper at the end of October?

And many thanks to all the participants for taking part over the weekend. I hope you enjoyed it as much as I did. I rather like the fact that at some points on the cruise, the sailing can be close enough to engender a bit of light-hearted competitiveness.