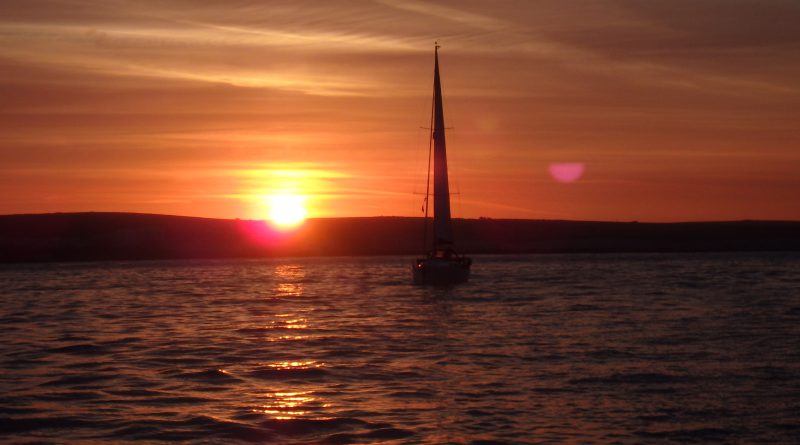 The fleet gathered in Gosport on Sunday evening for a Briefing and drinks party and there was no reason not to set off east on Monday morning with a forecast of Variable 3 or less. Seven boats headed off for Brighton at 0700 to catch the favourable tide at the Looe Channel off Selsey. Initially a motor sail gave way to a close reach along the coast off Bognor Regis, Littlehampton, Worthing & Shoreham with the new Rampion Wind Farm off shore and arrival in Brighton Marina early afternoon. Courtesy of Flapjack and their amazing meal deal offer at Prezzo, the only minor headache at the end of an enjoyable social evening was working out the bill, but no problem with a calculator!

On Tuesday everybody was able to make their own arrangements for visiting the different sights of Brighton. There was a little apprehension for those berthed on the outside of the visitor’s pontoon as the floating lifeboat shed was manoeuvred to a new permanent position in the strong south westerly winds, accompanied by vocal entertainment from the tug boat skipper. At the second drinks party / briefing six boats favoured a return to the Solent on Wednesday in view of deteriorating forecasts and being potentially storm bound in Eastbourne later in the week.

For the west going tide an early 0500 start on Wednesday morning was of necessity before sunrise. Good Day Sunshine, Tipsea Again, Sea Breeze & Quintette were all motor sailing again at the start but when the wind picked up had some good sailing along from Littlehampton around Selsey Bill and to make the Looe Channel before 1100 and the tide change. First Light ventured into Portsmouth to see HMS Queen Elizabeth and Raven continued to the Hamble. Flapjack’s plan to make Eastbourne were abandoned after the morning forecast would have meant an even longer stay but by 0700 it was too late for the west going tide and stay in Brighton was extended.

Not the ‘Far East’ Cruise as originally planned to Eastbourne, more ‘Middle East’ to Brighton but certainly further than 2016 and there will always be another chance next year. For all the Far East Virgins there were rumours of celebrations on board when passing West Pole. Thanks to John & Jane on First Light for their support by stepping in to be Deputies at short notice.