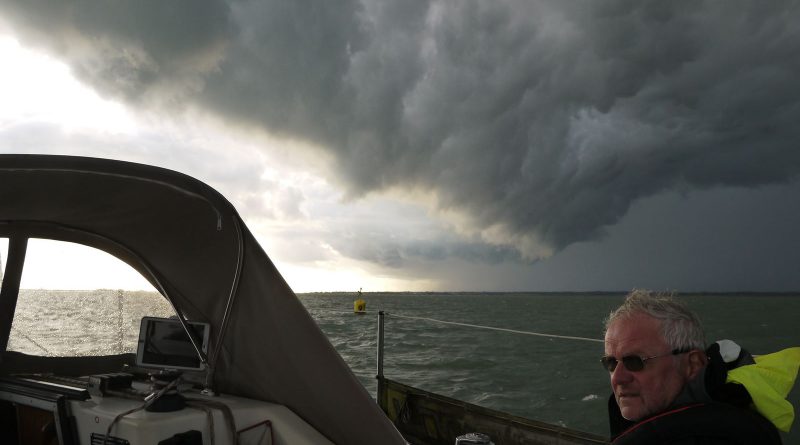 It seems that the weather this year has a significant part to play in the outcome of our Cruise/Races. The forecast for this early September weekend was for a brisk westerly on Saturday, and a fair start to Sunday, but with a storm due to reach the Solent by lunchtime. That was enough to put off a couple of crews – up to a week beforehand!

So I, & a number of other potential participants were watching the forecasts right up to the Sailors’ Social on Friday evening – and amazingly, none of these forecasts changed significantly over that whole week. Nevertheless, on Friday, Crayzee Feeling & Revelation decided we would brave these elements – and head towards Yarmouth the next day. And as a late addition, Nick McCarthy in Ursa Minor decided to come too.

To take best advantage of the tides, the start on Saturday was quite late – scheduled for 1.30pm. As all three boats were at Chi Buoy earlier than that, and the moderate (F4-ish) wind over tide made it look as if some of the day’s sailing could be a bit of a slog, we all set off at 1.15pm. I reckoned every little would help!

After the start, Ursa Minor & Revelation headed for Bembridge on our first tack of the afternoon, but within a short time, Crayzee Feeling had set off at 90 degrees from us. And soon disappeared from sight.

Those first few hours were tough going, with the choppy seas almost stopping us on occasion, and it was a struggle to make over 4 knots VMG. Gradually Revelation pulled only slightly ahead of Ursa Minor – and we were really disappointed when Nick decided to call it a day, and return to Chichester. My crew (a stalwart Jim Prior) was not so lucky, so we slogged on towards Cowes.

After Cowes, the weather, the sea conditions, & the sailing all changed dramatically! The weather was nothing if not spectacular; the sea smoothed sufficiently to allow us to see 7+ knots over the ground; & we even had a couple of passes by the Waverley (paddle steamer) to cheer us up. The Waverley clearly has a pot of gold on board, if the end of the rainbow is to be believed.

We arrived at the finish in the nick of time, as far as the weather was concerned – and motored into Yarmouth, to find Crayzee Feeling’s crew waiting to take our lines on Harold Hayles’ pontoon. In fact, they had been waiting for us for over an hour – so Leg 1 of the Ian Brunt Trophy was emphatically won by Steve & Alexander Cray!

The other boats on the Harold Hayles pontoon included Misty Blue. Our Vice Commodore – Simon – & Allie had come down from Gosport that afternoon – and they joined us for a very sociable dinner in the Wheatsheaf.

We decided on a reasonably early start on the return leg on Sunday, to give us the best chance of getting back to Chichester before the predicted storm. Sunday morning proved to be a lovely day, but guess what: there was NO WIND! After a short discussion, we decided to move the start to Gurnard Buoy – so Crayzee Feeling & Revelation motored in company up the Western Solent, to a rolling start there.

Even then, it was a bit of a down-wind “ghosting” competition to start with. The tide was contributing more to our speed than the wind – and that put Revelation at an advantage over the bigger & heavier Crayzee Feeling, and we gradually pulled out a small lead. Even as the wind gradually increased through the morning, we managed to stay ahead, to reach Chi Buoy a few minutes in front – so Revelation won Leg 2 by a small margin.

The new Sailwave scoring software assigned overall victory to Revelation. Fortunately, Steve was able to explain the subtleties of “Appendix A” regatta scoring rules to me – so I will be able to accept the trophy with a clear conscience!