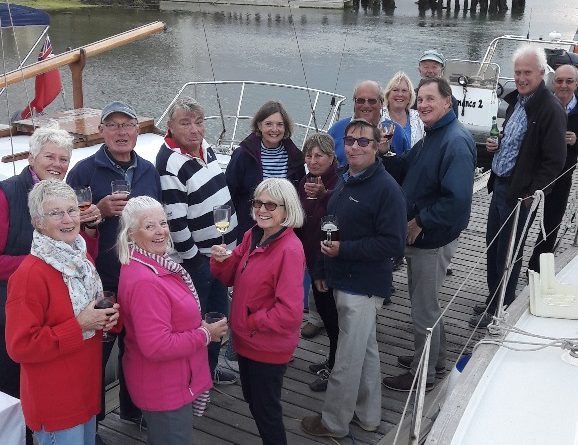 At last the wind eased back and this cruise could get under way, the first for a week or so! In fact there was precious little wind and it was on the nose (again) as a strong tide pushed the nine yachts down to Yarmouth. The majority were already out, scattered around the Solent, and hence Harold Hayles’ was more like a rendezvous. A restorative pontoon party and dinner at the Wheatsheaf followed.

The next day was set for a walk to the Red Lion in Freshwater for lunch, whilst taking an observation test en route. All crews had a list of questions, a collecting bag for required specimens and cameras for the required piccies and videos. Flapjack set the pace, setting off early, with the rest of the fleet close behind. It quickly scattered however, as different strategies were pursued. Coco and Magic Touch followed a policy of photographing everything, just in case, while Thorney Flame and Dawn Chorus more than adequately filled their collecting bags.

Good Day Sunshine, having set the questions, just enjoyed the very pleasant walk. Teise and Sigridur joined in the bar. Judging took place after lunch in the garden to enjoy the sunshine. Scoring was high although the submission of video renditions of the required walking songs was somewhat underwhelming. The winner by one point was Avalon of Hamble, but they had to wait for their prize until that evening as GDSShine had forgot to bring it! Altogether, an enjoyable way of enlivening the walk.

The following day saw some brisk southerly winds forecast and, with an early start for most, the fleet spread out, some returning to Chichester on a very lumpy sea after the forts, some to other Solent locations and some staying on in Yarmouth for another day. Our thanks to all participants.

To see more photos, or to add your own, please follow this link.