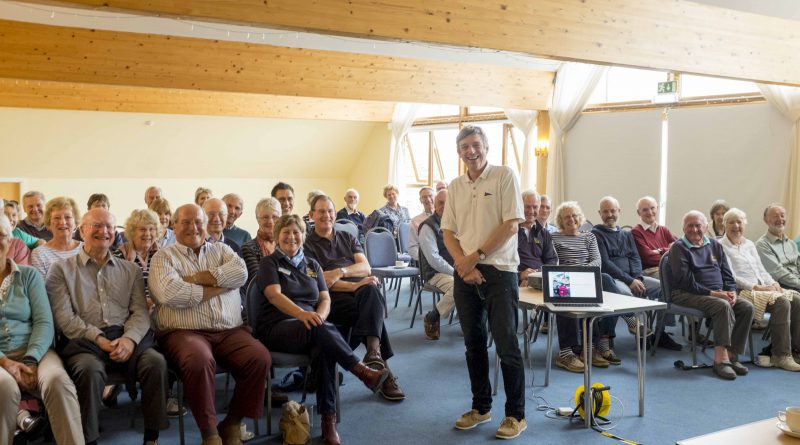 Local sailor and professional photographer, Tim Bishop gave a very lively lecture on Sunday morning attended by over 40 club members. He recounted his adventures crossing the Atlantic with the ARC last year from Las Palmas to St Lucia, skippering “Angel Share” a brand new Oyster 57 costing £2.5 million. A fleet of 291 boats involving 1700 crew gathered in the small Horta marina. Before setting off, the organisers checked every boat to ensure their equipment was adequate. They also arranged seminars on meteorology and navigation.

The crew of “Angels Share” came from varied backgrounds:- the owner Nick a business executive had invaluable people skills but only a little sailing experience, Tim had a wealth of experience in all sorts of boats and conditions, one member was a keen racer and liked to tweek the sails, one lad was just 17, and Taz who works for Oyster Yachts as an engineer, so when things broke he was often called upon to make the necessary repairs.

Before leaving they painted their logo on the harbour wall as is traditionally done by all competitors. They organized the victualling so that each of the 5 chaps on board prepared 3 meals for the onboard freezer, and took turns in being cook for a day. Tim cooked fresh bread each day and sometimes a dorado or other fish was caught. Once the fishing line caught an old boot and inside it there was a crab!

Apart from the freezer other luxurious equipment on board included air conditioning, water maker and a generator. Tim compared this trip with his earliest Atlantic crossings when he was a teenager – SSB radio and a sextant being the main tools for navigation and communication in those days. “Angels Share” benefitted from satellite communication with the ability to send emails and talk to loved ones as well as other yachts. And of course they were able to receive live weather maps showing the position and movement of storms and squalls. Tim showed that twin foresails goosewinged with a following wind, which they experienced for 60% of the trip, made for a very stable arrangement. They also experienced sudden squalls when the top down furling asymetric sail proved invaluable.

Not all the yachts were crewed by experienced sailors. “Angels Share” and another yacht answered a Mayday put out by a More 55 yacht 20 miles away which had lost its rudder. This involved turning into the weather and standing by overnight. In reality the crew of this yacht had lost confidence in their skipper and asked to be taken off.

Angels Share was a very green boat. The crew collected litter and kept it on board in the rib on the davits until it was sent for recycling in St Lucia.

Tim and the crew reached Pigeon Island on St Lucia after 17 days at sea with a tremendous feeling of achievement and were ready to start partying with other successful yachts.

Those club members who couldn’t get to Tim’s lecture sadly missed a wonderful morning’s entertainment.