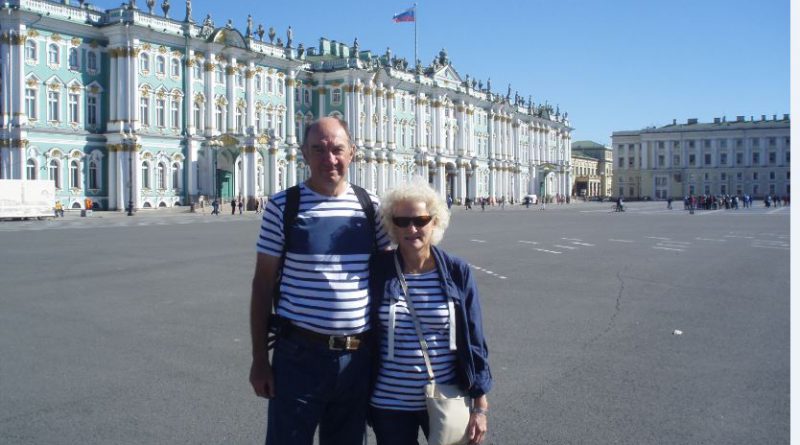 Bob and Sue Garrett are a very energetic sailing couple. We first met them in France where we joined a Cruising Association rally which they were running. They are joint secretaries of the Channel Section of the CA. You may have seen them on the water in and around Chichester as they keep their yacht “Intrepid” a Dufour 36 in the Itchenor channel. They also race with the Chichester Cruiser Racing Club of which Bob is the Commodore.

So, when they retired they decided to cruise to the Baltic leaving from Chichester in the Spring and returning 6 months later.

They planned to make the trip by day sailing in the main, via Belgium and Holland and the Keil Canal – where they encountered many very big ships. They told us how quiet it was in the Spring as the Baltic sailing season only really lasts from mid June to the end of August.

In Denmark they visited Heligoland, a tax free island visited by crowds of German visitors stocking up on duty free goods, Copenhagen where the Eurovision Song Contest was being held in a nearby hanger, and Helsingor – the castle which inspired Shakespeare’s Hamlet – to name but a few.

In Sweden they told us that the common method of mooring was in “boxes”, similar to Birdham Pool, or tying close up to rocks and dropping a kedge anchor astern. The local pilot books were essential as many areas were very shallow and there were byways marked by leading lines. The facilities on many of the small islands included toilets, saunas, picnic areas and barbeques, catering for the many Swedes who come here in the summer. Midsummer, when there was only about 2 hours of darkness, was celebrated in style in Sweden and Estonia with fish buffets and dancing. We learnt that there are no fish to be caught in the Baltic due to its poor water quality.

An overnight passage was made to Happassari in Finland, the easiest place to check out of Europe before entering Russian waters. The Customs’ formalities there included breathalysers as there are strict rules about drinking alcohol whilst in charge of a boat.

Bob and Sue joined an Ocean Cruising Club Rally here so they could sail in a convoy to Russia. This was another overnight trip of 97 miles where the Russian Coastguard required the yachts to call them periodically on the VHF and follow a designated route from one buoy to another. On entering Russia, the local representative of the CA, Vladimir, provided the visa application and helped with the tedious and costly process of checking in. So “Intrepid” and her crew reached St Petersburg where they spent a few days before slowly making their return cruise to the UK.

Generally the crew didn’t have early starts to catch the tide, because there is no tide in the Baltic, only a “scend” which is driven by high/low pressure giving rise to a current of up to one knot, and the water height rising and falling by only a few inches. The seas were generally smooth in the Baltic and it had only been necessary to seek shelter due to strong winds on a few occasions.

They described how they had researched the places en route, and arranged to visit towns and villages when there were special events taking place such as a medieval fair, an international Sea Shanty festival and markets.

Only a couple of the 60+ members in the audience had sailed to the Baltic, so the entertaining talk was inspiring, and perhaps might encourage others to make the trip to this beautiful cruising area.

Being Remembrance Sunday we paused at 11am to observe the 2 minutes silence.

The next Sunday morning lecture will be held on 14 January when our own Kerry Jackson will share her expert knowledge about the “Birds in Chichester Harbour”. More details soon. We look forward to welcoming members from all sections there.

Being Remembrance Sunday we paused at 11am to observe the 2 minutes silence.