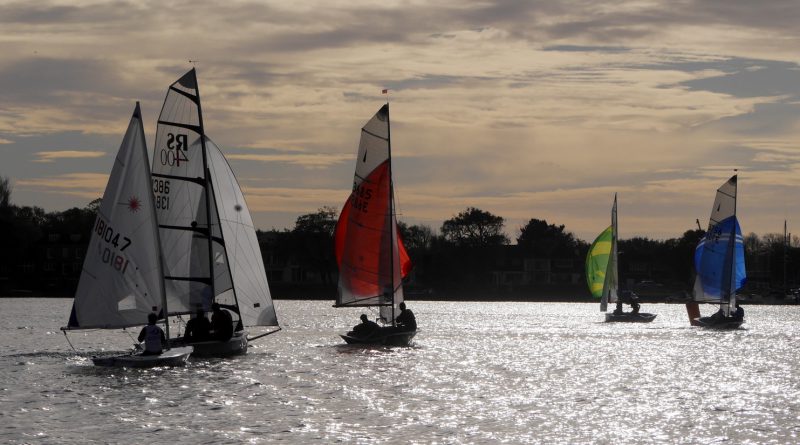 After the rain of Saturday, Sunday started with beautiful bright sunshine but very little wind. As the competitors arrived, the lake was a mirror with just a few areas with wind ripples. As the race team prepared for the event, the wind gradually filled in from a westerly direction.
The race officer, Pete Harrison, set a simple trapezium course for the fast and medium fleets, and a triangle for the slow fleet. 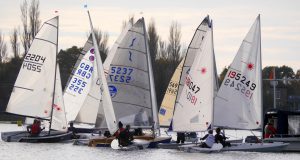 In the first race, the 17 bots in the fast fleet started with a few boats over the line, quickly given the all clear as they dipped back through the line.

Pete had judged the length of the course perfectly, with the Slow fleet getting away before the fast fleet returned at the end of their first lap. The slow fleet was 12 boats containing a mixture of Toppers, Bytes and Laser 4.7’s.

The light wind and strong tide forced the competitors to concentrate on every shift in wind direction. A number of competitors were caught out at the windward mark and had to tack again to make it round.

Over the two races, the Merlin’s of Will and Mary Henderson and of Alex Jackson and Mark Oakley took a win each in the fast fleet. Felpham’s Guy Mayger maintained his unbeaten run with two first places in the medium fleet followed by CYC’s Charlie Porter in the first race and CYC’s Tim Boon in the second. In the Slow Fleet Felpham’s Dylan Collier just beat Felpham’s Jill Gill in her Byte CII by a second after the handicap was applied.

The next Chichester Yacht Club frozen toe race is on the 3rd December.

Full results are available on the club website with photo’s from the event.