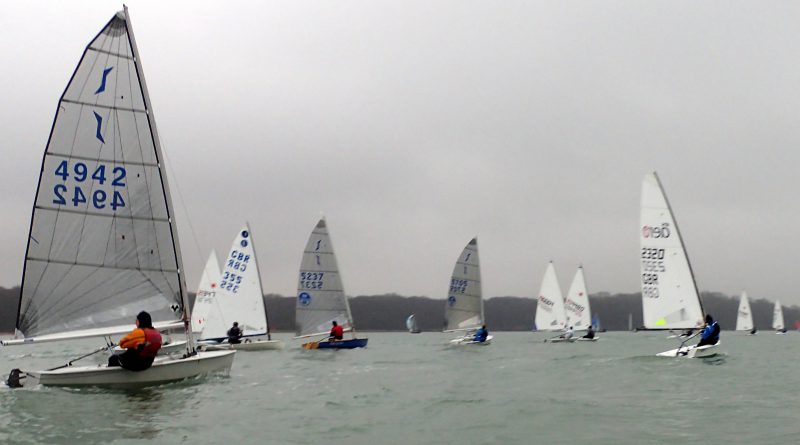 Despite the wet cold weather 48 boats turned out for the first of Chichester Yacht Club’s Snowflake winter series. The forecast strong winds had shifted to the evening leaving a good F4 breeze which filled in by the race start 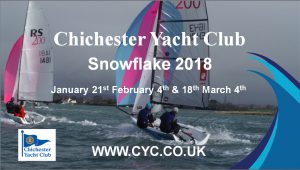 time of 1300. But with the wind forecast to shift direction Race officer Phil Allen set a figure eight course aiming to be flexible if the wind shifted during the race.

At the start of the first race at least one Merlin was over the line and had to double back. The course took them on a beat from West to East toward the Marina, before bearing away on the first of a series of long reaches back to the start line. The wind around the headland proved tricky with some of the competitors choosing to go deeper into the channel to avoid the wind holes. Over the water Simon and Eve Townsend’s RS400 from Emsworth SC finished first, but their lead was not enough to beat Will and Mary Henderson in their Merlin Rocket from Itchenor SC after the times were adjusted for Portsmouth Yardstick.  In Race 2 Ben and Roz McGrane from Netley SC won with WIll and Mary second.

The medium fleet had a particularly good turn-out of Solos, 2000s, Lasers, as well as a strong fleet of the new light weight single handed RS Aero 7s. In both races the front of the fleet was a battle between Steve Cockerill and Mark Riddington in their Aero 7’s. In both races Steve held Mark off by less than 10 seconds. In the Second race Sarah Cockerill came in third to complete a 1,2,3 for the Aero’s.

The Slow fleet had a good squad of Toppers and Laser 4.7’s with first time visitor to CYC, John Stokes in his Optimist. In the first race there was nothing to separate the Mirror of Alice and Richard Bullock from the Topper sailed by Alfie Lester, but after the handicap was applied the Mirror won the race by 25 seconds. In the second race Alfie finished ahead but not by enough to overcome the Mirror’s handicap.

Full results for the snowflake series are available on the open meeting results page.

The next Snowflake event is on the 4th February, details available from the Chichester Yacht club website.