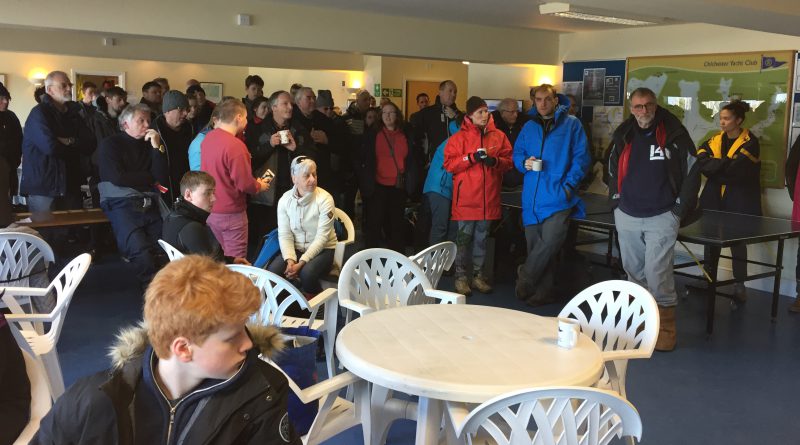 With the grey month of January thankfully behind us, the first snowflake in February took place on a beautiful bright, sunny, cold and windy day. Perfect weather for the 40 boats and their hardy winter sailors.

The racing was delayed by the high pressure which held up the arrival of the tide to CYC’s lake. When the water eventually filled in, the Wind from the North East allowed race officer Martin Orton to set a figure eight course with a long beat from Birdham to beyond Coperas and wing marks making for exciting downwind reaching race.

When the first race started, the slight port bias to the line saw a couple of boats overshoot the pin end and have to double back before getting underway. During the first lap, the gusty wind caused a number of capsizes and led to some early retirements.

In the fast fleet the Merlins, Rs400’s and Fireballs appeared to make easy going of the conditions. Ben and Roz McGrane from Netley SC extended their lead in the series with two first places, followed by Andrew Dalby and Gareth Porkins who finished second in both races.

In the Medium fleet, Steve Cockerill demonstrated how to get the Aero7 planing downwind, sailing with very little of the boat touching the water. Steve finished the day with two first places to extend his 100% record in the series. In the first race Ian and Sarah Yardley from Silver Wing SC kept up with Steve in the early stages of the race, but finished second by a minute after the results were corrected. In the Second race Mark Riddington claimed second place. The three 2000’s had a fascinating race, with Jonathan Townsend and Barbara Langford sailing very quickly with a reefed mainsail, They managed to keep ahead of the other two boats for two of the three laps but were overhauled by Ian and Sarah Yardley on the final lap.

The Slow fleet started with 10 boats, but by the second race the fleet was down to four, a Mirror, a topper, a laser 4.7 and a Quba. The Mirror sailed by Alice and Richard Bullock from Itchenor SC took first place in both races, followed by Alfie Lester in the first race and Alice Serna in the second.  Alice in the Topper,  Owen Rowlands in the Laser 4.7 and Alex Cray with Ellie Cawley sailing in the RS Quba were all justifiably pleased to complete the course in the challenging conditions.

The Next snowflake is on Sunday 18th February with the entry desk open from 9:30 and the first race due to start at 11:30.