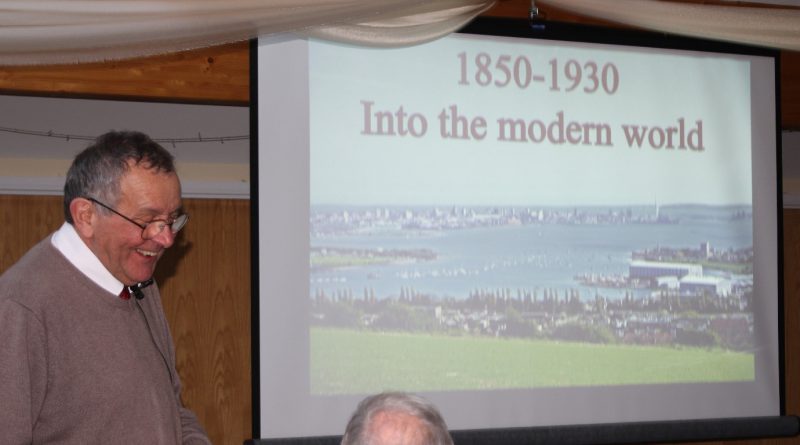 On Sunday 11th February around 90 people enjoyed another fascinating and entertaining talk from Andrew Negus, a retired history teacher and Blue Badge Guide, who returned to CYC to present part 3 of his trilogy on the development of Portsmouth, the only island city in the country.

He picked up the history in 1850 when billions of pounds were being spent to protect the navy and the dockyard was the largest factory complex in the world, employing over 4,000 people. The town was dangerous and filthy but over the next thirty years became healthier and wealthier, in general, though there continued to be poverty and squalor throughout the period covered by the talk.

A number of factors influenced changes in the 1860’s and 70’s: –
HMS Warrior, the first iron hulled, armoured battleship powered by steam and sail, was too large for the existing dockyard and part of the harbour was reclaimed to extend the site.
One of the first sewage systems in the country was built at Eastney, removing the dung from the streets.
Corset factories provided employment for the wives of sailors and dockyard workers.
HMS Vernon, the Royal Navy’s Torpedo School and HMS Excellent, the first on land gunnery school, were established. The Quarterdeck Block on Whale Island, home to HMS Excellent, is now a small museum housing artefacts from the school including the gun carriage which is always maintained in readiness for use in state funerals.
Dame Agnes Weston opened the Sailors’ Rest and Sarah Robinson the Soldiers’ Welcome, providing clean, safe accommodation and entertainment away from alcohol.
The Grammar School was re-founded. Hospitals, hotels and theatres were built.

Towards the end of the nineteenth century the first turbine power station and the Guildhall were built and Portsmouth Football Club was established, with Arthur Conan Doyle as one of the founding members.

As would be expected, Portsmouth made a significant contribution to WW1 – building ships, supplying sailors and soldiers, including 3 Pals Battalions from the area.

In 1926 Portsmouth became a city and the parish church of St Thomas of Canterbury became the cathedral of the new Diocese of Portsmouth, created when the Diocese of Winchester was split into three.

The talk ended in 1930 with recession, the population of Portsmouth outgrowing the space within the walls, unemployment as no ships were being built and more poverty. This set the scene for the sequel of what is now a quartet.

Due to the large number of people interested in joining a guided tour of Portsmouth with Andrew a second tour is planned in March.