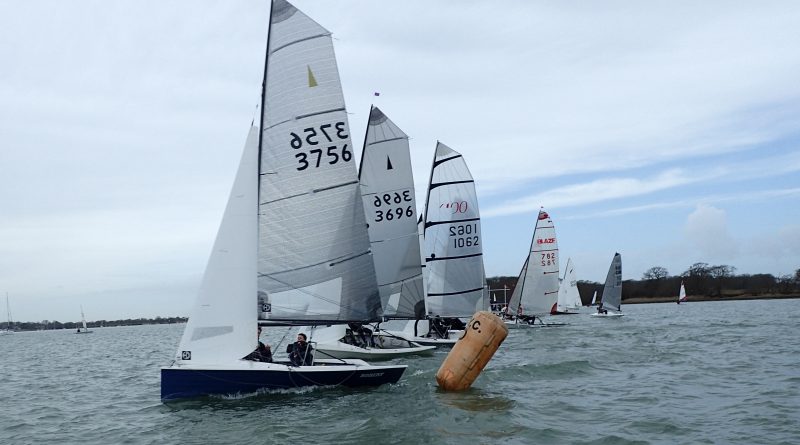 The final event of CYC’s Snowflake series 2018, took part on Sunday 4th March. After the week of snow and storms, Sunday was relatively mild with no sign of snow around the sailing area. 40 boats arrived for races 7&8 to a bright morning with a force 4 wind from a southerly direction. The Air temperature was a “warm” 7°C,  but the water temperature was a “chilly” 3°C.

The race organisers were very grateful to Richard Anderton who stepped in as race officer after illness prevented the scheduled RO from attending. Richard set a Trapezium course with the committee boat close to the west shore and the windward mark close to Birdham Pool’s Entrance. The course provided something for everyone with a long beat, two close reaches and a run downwind. The wind conditions were “quite shifty” with gusts and changes of direction causing sailors to gain or lose ground depending on how well they anticipated the changes.

In the 10 boat, Fast Fleet Itchenor SC’s Will and Mary Henderson won Race 7 in their Merlin-Rocket, closely followed by Merlin “Robert” sailed by Sophie Mackley. Third place was taken by Thomas Southwell in his first appearance in this years Snowflake in a Devoti D-Zero. In race 8, Sophie won, followed by  Merlin “Tiger Tiger” sailed by Alex Warren and William Carroll, third place went to Will and Mary.

In the 20 boat Medium Fleet, Mark Riddington from Emsworth Slipper SC won both races 7 & 8 Sailing his Aero 7, followed on both occassions by Toby Schofield in another Aero7. In race 7 third place went to Iain and Sarah Yardley sailing a 2000. In race 8 third place went to Charlie South in his Laser Radial.

In the Slow fleet Oliver Randall-May sailing a Laser 4.7 finished ahead of Thomas Lawson in his Topper. The faster Laser completed 5 laps to the toppers 4, Oliver managed to build enough of a lead to take the first race after the handicap was applied. In the 8th race, Thomas Lawson was fast enough to win by 1 second after the handicap was applied, second place went to Owen Rowlands and third to Oliver Randall-May.

The Fast fleet series Snowflake Trophy won by Itchenor SC’s Will and Mary Henderson, followed by Alex Warren and William Carroll, Third place went to Simon and Eve Townsend in their RS400.

Full results and photos can be found on the CYC open meeting race results page.

For details of other Open Events at CYC visit the Open Meeting page on the CYC Website.

CYC has an open day for anyone interested in joining the Sailing club on the 28th April.