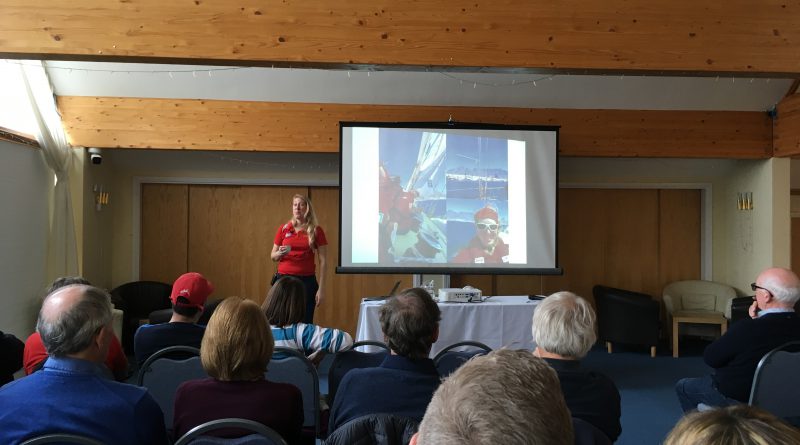 For the “average” Chichester Yacht Club member, the height of our sailing ambition might be to get out of the Solent for a few weeks in the summer – maybe to go on the RC’s Cruise to Brittany or join the West Country Cruise. But maybe, we all secretly (or not so secretly) really hope that it is not yet too late to embark on that trip across the Atlantic, or even to carry on cruising around the world!

Our speaker on Sunday – Caroline Bowen – actually stepped up to the challenge a few years’ ago, and signed on for a Round the World trip with Sir Robin Knox-Johnson’s Clipper Race.

Caroline is a local, actually a member of Bosham Yacht Club, where her family introduced her to sailing very young. By the age of 8 she was at Sea School, going on to attend 11 years’ worth of Bosham Junior Weeks; continued her interest through university at Edinburgh and as an Oxford Blue; & attended the 2005 World Championships in the Yngling Class.

All this made Caroline a very atypical participant in the Clipper Round the World Race, where the majority of people are new to sailing. Indeed, preparation for this 40,000 mile, 11-month event consisted of just a week of training for each of the following: crew skills; offshore sailing; spinnaker handling; and finally team tactics & fleet racing.

Around 400 people sign up for each Clipper Race, to be one of a crew of between 14 & 22 on one of 12 (now 11 – more later) yachts racing on a multi-leg ocean race. Not everyone signs on to be a “worlder”; some just for a single leg, but Caroline was there for the whole race – on “Qingdao” sponsored by the Chinese city of that name.

Caroline outlined the features and challenges of each of the “legs” in turn. The first leg from London to Rio notable for reasonably benign weather and a single tack lasting 2000 miles! Her sister was on another Clipper boat & after 1000 miles, they passed within 3 boat lengths of each other.

Even before the start of Leg 2 Rio to Capetown, some of the hazards of ocean racing became evident: another boat (Elmax) had run aground & Qingdao was sent to assist. But she too ended up beached, before being re-floated and taken to a local marina for repairs. Was it a measure of the strength of these yachts that this pair was delayed by only 3 or 4 days before setting off to Capetown? But after Capetown, yet again Elmax ended up on a reef, which finally wrote her off.

Caroline vividly described the journey’s high & low points, but also of the mundane aspects of life on board; the growing importance of food as the one variable in the daily routines; the struggles with maintaining the equipment; the scale of victualing the yacht for the next leg (Caroline’s role from Vietnam on); & the shear effort of repairing ripped sails (3 people for 10 days on one occasion!). I cannot find a better way to describe this than Caroline’s own words:

“When you bump into an old friend it is always hard to do justice to your last year with a short sound bite. It is harder still to explain a year at sea, racing a 70ft yacht around the world with a crew of 15, as part of the Clipper Round the World Race. For a year I raced across oceans, showered once a month and brushed my teeth with salt water. I didn’t see my own reflection, have my own bunk, have access to email or know what day of the week it was. There were points I wondered if I had underestimated the challenge, the determination and resilience required, as I grappled with the possibility of failure.

My motivation for completion moved between a desire to “achieve something remarkable” and a fear of losing face with all those I’d shared my dream with. As the race continued my confidence that I’d complete it grew as the toughest weather and passages were behind us, and I took time to enjoy the wonder of being at sea and travelling thousands of miles from land and other people”.

Well, judging by the attention afforded throughout by the audience of around 50 CYC members, and the questions generated in the final part of the session, the “short sound bite” we heard was enough to put us in awe of Caroline’s achievement!

If you would like to see more, there are a couple of photos on the club Yogile site.