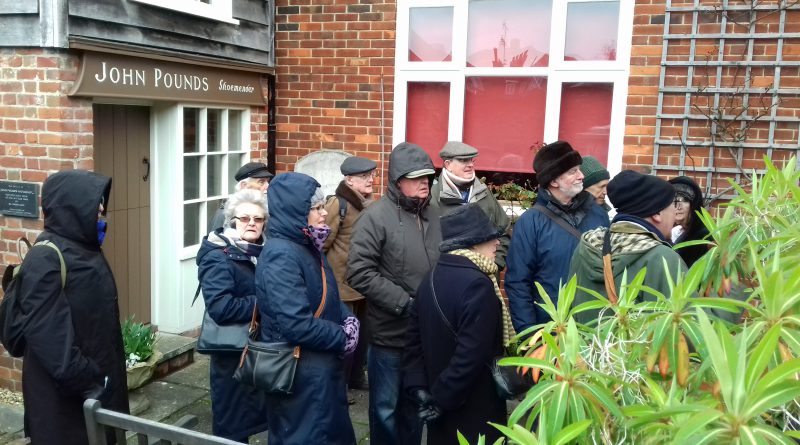 20 members of CYC mustered at the dockyard gates and despite the sub-zero temperatures sallied forth in search of evidence of Portsmouth’s historic past, which Andrew Negus had described so vividly in his Sunday lectures at the club this winter.

It didn’t take much sallying to find our first piece of evidence as our gaze travelled over to the anchorage of HMS Warrior, built in 1860, the fastest ship on the seas, for a while, anyway, and for which the dockyard had to be enlarged.

On to St Johns square, the so-called medieval gateway to Normandy and where Brunel’s father invented a machine to make pulley blocks for the navy and then the Landport gate, an arch of Portland stone and a reminder of the landward defences of old Portsmouth which still stands very much as Nelson would have known it. Gun Wharf Quays used to bristle with cannon to protect it from the sea but now only strikes terror into the hearts of non-shoppers. Onward to the old barracks, since 1732 part of Portsmouth Grammar School. There, a row of handsome buildings remains, including the one where the Duke of Buckingham met his bloody end.

We saw a replica of the tiny cobbler’s shop where John Pound made it his business to feed clothe and educate the homeless and poorest children of the town. Then Lombard street, a hidden gem with historic houses, surprising survivors given the huge number of air raids on the town during the war.
The bombs also destroyed the old chapel which is now the site of the architecturally jumbled but characterful cathedral, last resting place of the aforementioned Duke of Buckingham’s bowels (if you want to know more ask Andrew)!

On to the Bridge Tavern, also a blitz survivor, which overlooks the Camber, a small commercial fishing quay, probably the original medieval port from which the town has grown.

Next, the cramped old streets of Spice Island in Old Portsmouth, following the Pompey Millennium Promenade Trail. This is marked by a linked chain motif set into the paving stones, recalling Henry VIII’s chain across the harbour entrance which could be raised to keep the French out!

Through to Sally Port to look at the sculptures commemorating some of the first English settlers leaving Portsmouth for Australia, and for the Oregon Trail in the States.

Then on to the Nelson Trail past St Nicholas’s church, all that remains of the monastic buildings of 1215. A place of refuge for travellers but not for us as we continued on past a high grass bank, part of the fortifications built to defend the town from attack, following in the (final) footsteps of Nelson as he went to board the Victory.

The Hot Walls weren’t very hot as The Mini Beast from the East now unleashed snow to complement freezing temperatures and strong winds. As the Beast raged, the Still and West hove into view and as this was the lunch stop the pace of the walk notably increased. With rum rations in hand we thawed out and reflected on the findings of the morning.

A big thank you to Andrew Negus (guide) and Helen Jupp who organised the event with her usual efficiency.