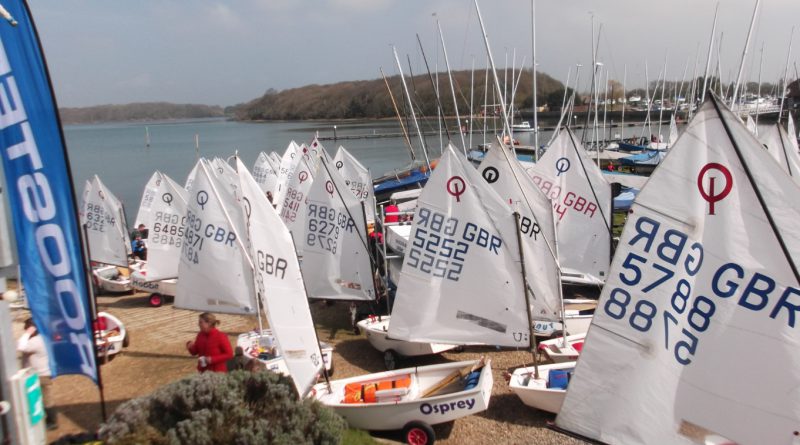 A record number of optimists attended the Chichester Yacht Club open. As the first event in the Rooster traveller series the meeting attracted almost 80 competitors. As they arrived they packed the car park with trailers and boats. WIth so many competitors, of wide ranging ability, the optimist open runs two fleets. The regatta fleet for the less experienced and a main fleet for the more advanced.

As they arrived, the day offered no wind and fog so thick that it hid the marina pontoon from view, only 30 meters away. The competitors and race officials waited patiently for the fog to clear. Eventually the sun burnt off the fog to reveal a clear blue sky and the breeze filled in allowing the racing to start. Even with the delay, the Main fleet managed three races and the regatta fleet two before the tide drained the water from the lake.

When the results were tallied the Main Fleet event was won by Henry Keegan of Parkstone SC who managed to come first in two of the races, he was followed by Sam Watson from Emsworth SC and Noah Evans, Emma Breese and Freddie Fitzsimmons all from Royal Lymington.

The Regatta fleet was won by Zac Shepherd from Bosham SC, followed by Max Slatter from CYC and William Webster from Parkstone.

The Race Officer was reported as saying: ‘I just couldn’t help noticing the number of sailors who called thank you as they finished, and the banter that was going on between the sailors.  I got a real sense of a bunch of kids enjoying the sailing and being with friends.’

Full results and photographs are available on the CYC Open meeting results page.