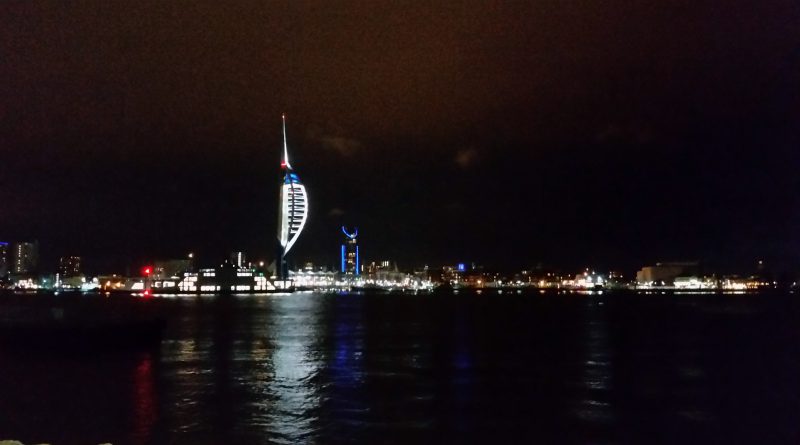 News On the water Yachts Posts
4th May 2018 Office CYC

Despite what was threatening to be disastrously poor weather it all turned out to be a good sail and an enjoyable weekend all round for the 5 boats that joined the cruise to Gosport Marina for the last weekend in April. We welcomed seeing new members Paul & Jan and their Beneteau “Canapus” join the fun for their shakedown cruise of the season.

There was very little wind forecast on Saturday and that was likely to be on the nose heading from Chichester to Gosport. There was also rain on the cards and very low temperatures for the time of the year. The rain held off and the wind was just ok to push us gently along and with enough northerly to mean a reasonable single tack to Horse sand fort and into Gosport from there. Nick Cole and his crew Tim also managed to find enough wind to push “Aquaholic” to the Nab tower and then onto Gosport. John and Jane of “First Light” managed to man the club open day before setting off and still arriving in time for the pontoon party.

We were moored very close to “Suhaili”, Sir Robin Knox-Johnston’s boat from his solo non-stop sail around the world in 1968-69. Most of us had a good look at this famous piece of sailing history. There were also a large number of the Clipper round the world training yachts moored nearby which was an impressive sight.

David and Janet Doble kindly agreed to hold the “pontoon” party aboard their Westerly Fulmar “Teise” so we could all keep warm. We managed to squeeze 12 intrepid sailors into their saloon and nibbles and drinks flowed until we departed for short walk along the harbour front to our Dinner venue aboard the Haslar lightship “The Mary Mouse 2”. We had a comfortable table in the main dining area with great food and service, and we all had a thoroughly enjoyable evening.

With high winds threatening late Sunday afternoon and evening most boats left around 9 – 10 am to avoid any chance of getting caught out. “Teise” chose to remain in port for another night or two. With reefs set it was a great & speedy sail through the gap in the submarine barrier and straight to Chichester bar on one tack with winds in the North East. There was enough North for flat seas and keep us just off close hauled to make it a comfortable and frisky sail. However it was cold! Hats, gloves and numerous layers of clothing were needed to stay warmish!