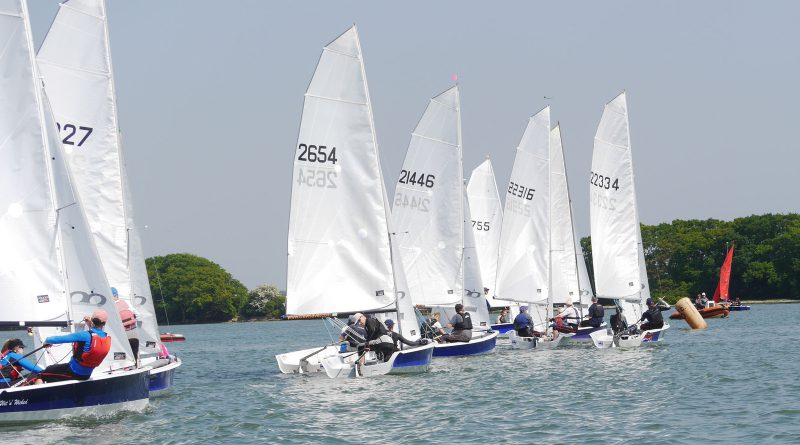 Arranging the 2000 open for the day of the royal wedding and the fa cup final may not seem like good planning, but with the race starting at 1400, and the club showing the wedding on a large screen, the competitors could, if they chose, enjoy all the afternoons events. As it was, the 17 boats that took part enjoyed a beautiful afternoons sail in light but steady wind.

The race officer Richard Anderton, after consulting with members of the fleet set the 2000’s preferred course of a windward/leeward course with a spreader at the windward and a gate at the Leeward end. The high pressure system over England seemed to delay the arrival of the tide, so the boats launched into a strong rising tide. With a bright sunshine, light southerly wind, strong tide and an random patches of seaweed, the scene was set for a typical spring Chichester harbour race.

In the first races the fleet beat up the east side of the course to lessen the effect of the tide. In races one and two, Simon Horsfield and Katie Burridge took the first place followed by Rob and Sarah Burridge.. The second race saw a Burridge 1,2,3 with Tim Hurley Sailing with Gemma Burridge taking the third place. The final race was after high tide, so the fleet split more evenly in the windward leg, with the first two places reversing to give Rob and Sarah the win.

When the final results were calculated Simon and Katie Sailing in the Army Sailing Association boat took the series and the CYC Idun trophy. Rob and Sarah took second and Ian and Sarah Yardley third.

The prizes for the highest placed competitors CYC fleet was awarded to Roger Millet and Biddy Colbourne. Roger and Biddy only decided to sail together an hour before the start. Roger returning to the 2000 after a long break, and Biddy swapping her preferred GP14 for the assymetric 2000, demonstrating that good sailors can be competitive in any boat. Second CYC boat was Ian and James Farr also Sailing in the 2000 open after a gap of a few years. Third CYC boat was Helen and Mark Green, demonstrating that the boat sails much better when it Is not dragging weed from the center board.

The CYC endeavour prize for the lowest placed boat that completed all three races was won by Jonathan and Anne Watkins.

Full results and photographs courtesy of Stephen Green are available on the Open Meeting Results Page.

The next open meetings at CYC are the Topper open on the 3rd June and the CYC Regatta on the 16th June.