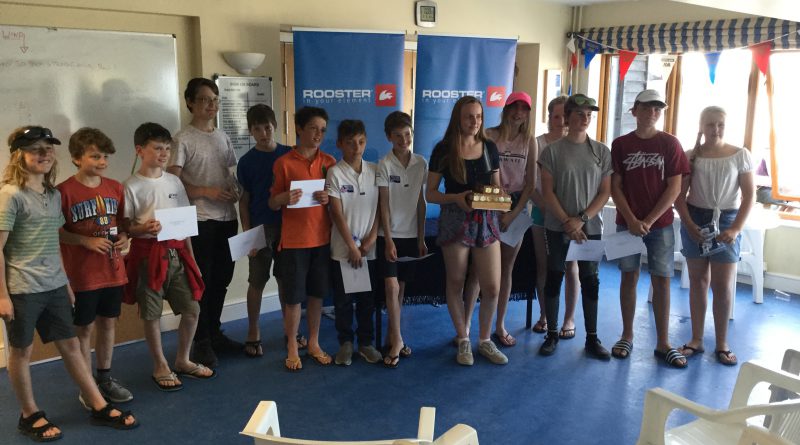 The CYC Topper Open 2018, sponsored by Rooster Sailing, was held on a bright sunny afternoon with light 7-8 Knot wind from the South. The Race Officer Charlie Porter set a Triangle/Sausage course, setting the length of the beat to avoid both the marina channel and the wind shadow cast by the club.

The 30 Topper 5.3 and 6 Topper 4.2 competitors launched and were quite a site as they made their way to the opposite bank of the CYC lake, guided across the marina channel by the club safety boats. The Light wind made for some dramatic gains and losses as sailors tried to exploit the slightest gust of wind and the tide.

In the four point two fleet the honors for each race were evenly spread with everyone getting at least a second place in one of the three races. When the results were calculated, the winner secured by his win in the final race was River Green from Poole Yacht Club, Second place went to Oscar Fry from Warsash SC and third went to Arran Goodman from Hill Head Sailing club.

In the five point three fleet the clear winner of the CYC Topper Trophy was Lilly Barrett from Island Barn Reservoir SC, who took all three races in first place. The spectators particularly enjoyed her tactics in the final race, where she built a sizable lead by best exploiting the effect of the fast falling tide. Second place went to Yana Skvortsova, also from IBRSC, who took two second places in the first two races. Third place went to Daniel Perkins from Warsash SC.

The prize for the highest placed CYC boat went to Charlie Gran who finished in 9th place overall.

Full race results and more photos are available on the CYC Website.