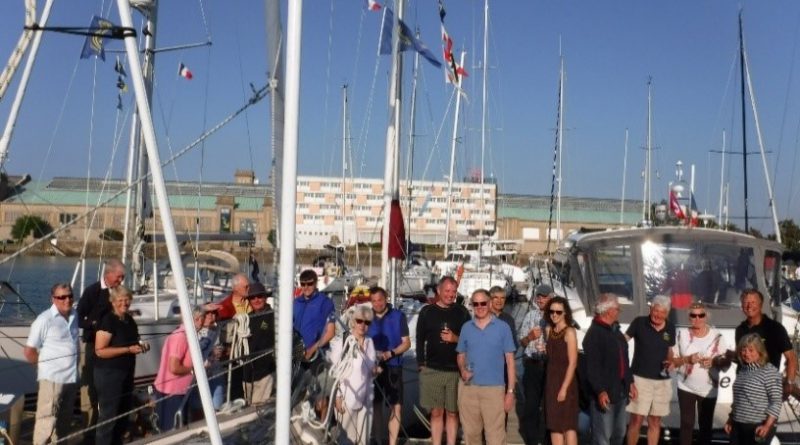 Nine CYC boats crossed to Cherbourg at the late May bank holiday weekend. Because of strong winds forecast for the Saturday, three set off the day before, and three the day after. However, the winds on the day proved to be ideal, providing those on the Saturday race with some most enjoyable sailing and a fast passage. Steve Cray did the race results calculations and announced that Bugsy 2 had won, with Crayzee Feeling second and Kerenza third. A pontoon party was held on the Sunday evening before going out for the evening meal in the Yacht Club restaurant.

Crazed Feeling, Fire Dragon and Obsession returned to Chichester on the Monday and Kerenza sailed off to Dartmouth, leaving five boats to sail on to St. Peter Port. We motor sailed past Cap de la Hague but were then able to sail much of the way with a following wind. As usual we moored for a couple of hours on the waiting pontoon before gaining access to Victoria marina, where we berthed at off season rates, it being the last few days of May. We spent Tuesday relaxing and exploring the town, had afternoon tea and cakes on board Bugsy 2 and then went out for a meal together at the Crows Nest.
We had a slightly worrying forecast of fog patches for our Wednesday sail to Lezardrieux, but after much deliberation decided to go for it. The first few hours of our trip were in fog much thicker than forecast, but this eventually cleared to provide us with another wonderful sail to arrive in Lezardrieux a few hours earlier than intended. This gave us some mooring up challenges in the strong tide, but everyone coped excellently, with assistance provided by the first ones in. We celebrated our successful trip with drinks on board Elise. Thursday was another day for relaxing and exploring and finished with a meal out at the nearby restaurant.

On Friday morning Dancing Deva left us to return via St. Peter Port. The rest of us set off early to venture upstream to Pontrieux. We had a gentle morning motor past pleasant scenery and birds singing and made it successfully up to the lock at Pontrieux, despite a worrying low bridge and a few shallow patches in the river. However, when we got there we couldn’t raise the lock keeper or harbour master on the radio or phone, and there was no sign of life, so we reluctantly had to give up and return with the tide to Lezardrieux.

We had a short rest on the waiting pontoon before setting off for Treguier a couple of days earlier than originally planned, though we dropped off Good Time Girl to clear weed from their engine cooling pipework. We motor sailed down the Trieux, and then took the rocky inner Passe de Gaine route round to the Treguier river. We arrived at the marina at slack water low tide as planned and were met by the marina manager who directed us to our berths and took our lines. We had evening drinks on board Rascallion before eating on board. We spent Saturday relaxing and exploring the area and in the evening, we had a farewell meal out before all going our separate ways in the morning, each of us with our own plans for venturing further.