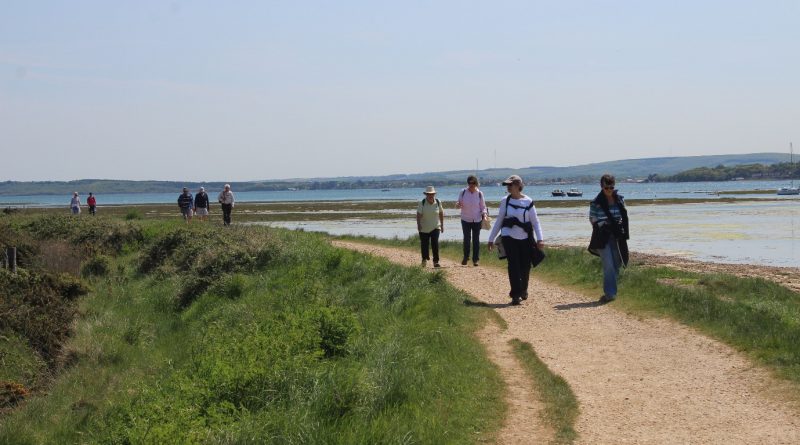 Good weather, plenty of wind for two cracking sails, a couple of nice walks, plenty of eating and drinking, and excellent company, what more do you need for a very enjoyable cruise?

On Monday 14 May 11 boats rendezvoused on the Dan Bran Pontoon, Lymington after a brilliant, fast sail from various parts of the Solent. Unfortunately Sea Breeze was unable to join us due to engine failure, having aborted two attempts to leave Chichester Harbour.

The pontoon party was held in glorious sunshine later that evening alongside Raven.

The following day everyone made their way to the Smuggler’s Inn, Milford on Sea for lunch, with 15 walkers and two cyclists walking and riding along the sea edge via Keyhaven, taking in the wonderful scenery and wildlife along the way. The strange activity by Milford on Sea WI of decorating street furniture with knitted covers was witnessed on route to the bus stop.

Most returned by bus in time for tea and cakes served on Raven and Good Day Sunshine. A tea time related quiz, compiled by the deputy cruise leaders kept everyone entertained and proved the competitive spirit of the sailors was alive and well. The team on Raven won this round.

Wednesday morning was cloudy, with mizzle but a fresh wind allowed a great sail round to Port Hamble, arriving at around high tide in time for lunch. An excellent meal in La Dolce Vita took place in the evening before a few of the cruise departed on Thursday back to Chichester.

Thursday brought the second lay day and a walk round the Hamble Rail Trail along the old railway line, through the Royal Victoria Country Park with a coffee stop and back along Southampton Water to the pink ferry over to Warsash. Lunch at Warsash Sailing Club was, as usual, good value but very slow and haphazard, due to a lack of catering staff. Sitting with a drink overlooking the water was, however, no great hardship.

Tea and cakes followed on Raven and Good Day Sunshine with the second of the cruise quizzes courtesy of our deputies, this time Call My Bluff style team guesswork to find the meaning of obscure words such as callipygian (shapely buttocks), jumentous (resembling horse urine) and gobemouche (gullible or credulous listener). Good Day Sunshine won this time, though as people had changed boats many were on both winning teams.
Friday was an early departure with little wind for a motor/slow sail back to Chichester.

Thanks to Sue and Philip Brown, Good Day Sunshine, our deputies and to Avalon of Hamble, Bugsy 2, Coco, Dawn Chorus, Fire Dragon, Flapjack, Nordic Star, Quintette and Seabird for joining us.

– by Carole Middleton and Bob Spencer