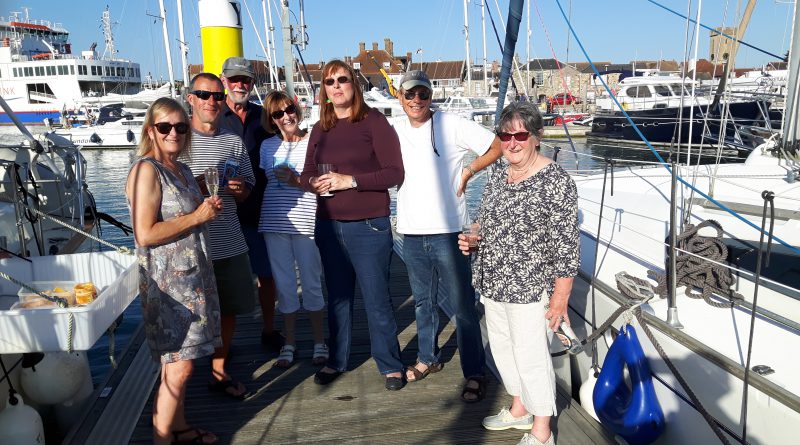 We started with a very informal skippers meeting in the bar at CYC. This was attended by Geoff and Gill Steeden (Gilli-Anne) lead boat, Chris and Sally Knight (Serendipite) and Mike and Carol Donnelly (Sealion). Peter Barker also joined us for a beer though sadly he and Marion would not be joining us for the cruise.

Tuesday morning we woke to glorious weather, blue cloudless skies with a gentle breeze from the E / SE.

Gilli-Anne departed Chichester Marina at 0800 shortly followed by Serendipite, we past Sealion who were getting ready to depart from Itchenor, our sails were hoisted near the harbour entrance and the engine turned off. Peace and quiet resumed, we were sailing although slowly. After a while I decided that we needed to make faster progress so we motor sailed on and off throughout the day. My excuse was that we needed to be in Yarmouth to welcome the other boats in. However Chris and Sally managed to sail all the way so a BIG Well Done to them. Despite our motor sailing David and Janet (Teise), who had departed from Gosport, arrived just before us and Serendipite and Sealion followed shortly after.

After a quick sort out of the boat and a bit of R & R, because I was up early, Gill then prepared the nibbles and we had a very pleasant pontoon party in brilliant sunshine, followed by a great evening at the Wheatsheaf. Lots of chatter and getting to know new friends.

Wednesday was another early ish start 0830. The wind forcast was E or NE 11 -13 kts so Gilli-Anne and Serendipite tacked back and forth heading for Osborne bay where we anchored and had lunch (one of us even had a swim) Sealion and Teise departed slightly later arriving at East Cowes Marina just after midday. By 1530 we had all arrived. The afternoon was free time before decamping to the Lifeboat Pub for another good evening with great food, beer and of course company.

Gilli-Anne departed at 0800 followed shortly by Serendipity. Sealion was heading for their berth in the Hamble while Teise was heading to Gosport so that Janet could indulge in some retail therapy (I think) … So they departed later that morning.

Despite my best efforts with sail trim, Chris and Sally eventually past us somewhere near the forts. I think the extra weight I have gained on this trip through good food and beer slowed us down … another excuse !!!

Anyway to round off, thanks again to Chris and Sally, Mike and Carol and Janet and David for making our first cruise (as leaders) so memorable and fun.

– by Geoff and Gill Steeden (Gilli-Anne)