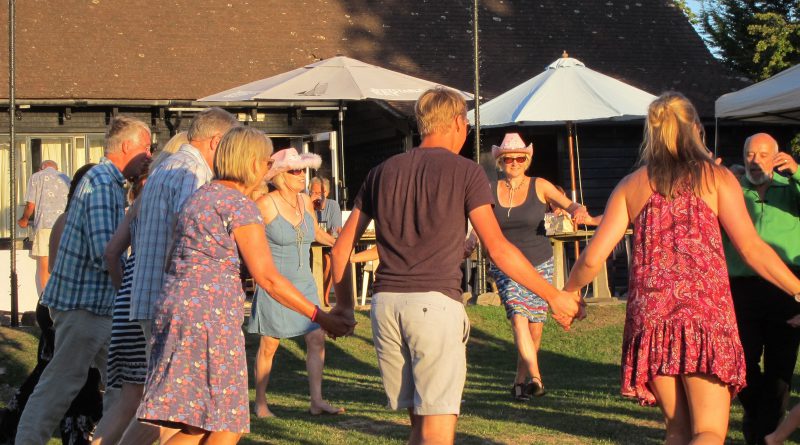 Dinghy Week 2018 ended on a high with a Barn Dance and BBQ. The glorious summer weather was back, allowing everyone to dance and sit in the garden until after 10pm. The week started in very different conditions, after weeks of beautiful summer weather, the Sunday forecast had wind gusting up to 42knts and rain, We had no option but to cancel Sunday’s racing and on the water coaching. The bad weather  didn’t stop the coaching from having a full day of activity, the coaches did a great job of inventing games that kept the children entertained and taught them about sailing.

By Monday the storm was much reduced, the wind was still very lively, but we managed to get everyone on the water. The Racers had some white knuckle sailing with reaches that saw the boats planing at speed. The weeks Race officer, Pete Harrison set a trapezium course, which gave a good combination of sailing angles.

CYC’s Dinghy week combines coaching, racing and Social, this year we tried a new event on the Monday evening, a Silent Disco. It was fun to see the kids doing a Conga through the club wearing headphones, then singing this years favorite song “three Lions” at the top of their voices. Later in the evening it was the adults turn, with three music channels to choose from, it was impossible to sit down!

On the Tuesday we had a record attendance for Johnathan’s Dinghy Week Quiz. Johnathan had put together another fiendish quiz, with rounds of puzzles, sounds, tastes and questions. By wednesday the Sunday storm was a distant memory as we de-camped to west wittering beach for a beach BBQ. A large group enjoyed relaxing on the beach, while the younger members went off to play rounders.

At the prize giving on Thursday, prizes were awarded for the kayak Race, Instructors race, Model Boat Building and fun and games on the clubs lawns. The winners of the main fleet racing were Cathy McHale in the slow fleet, Ian Payne in the Medium and Mike & Paula Olliff in the Fast fleet. The Winner of the Thursday pursuit race were Nick & Roger Eliman.

Dinghy Week is a fantastic week to be around the club, it’s always good, but when the weather is kind, there can be fewer better places to spend a week than beside the water in Chichester Harbour with friendly people enjoying watersports and after-sailing fun.