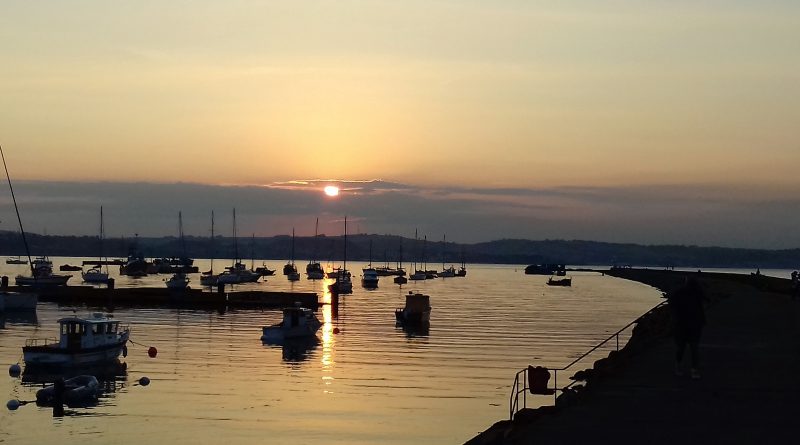 The Chichester Flotilla of seven boats rendezvoused in Torquay on Tuesday 12th June. With eastly winds, calm seas and sunshine, boats meandered towards Torquay from a range of destinations including the Channel Islands and Solent.

All crews gathered in the Royal Torbay Yacht Club for a briefing on the delights to come, from the cruise leaders Helen and Graeme Jupp on Dawn Chorus.

The mission: Fun and frivolity and of course, great sailing. And the rally quiz kicked off here, all answers to be found in the Charts or in the Pilot, between Torquay and the final destination, Fowey.

A pleasant but short sail to Brixham, the other side of Tor Bay, heralded the official beginning of our odyssey, shared with gannets, guillemots, gulls and of course, loads of lobster pots.

The day finished with a visit to Brixham Yacht club, which provided a delicious meal with great views over the busy harbour with its famous Brixham Trawlers, as well as the not so picturesque fishing fleet. At the end of the evening all crews embarked by dinghy to return to yachts on the Brixham YC pontoon – perilous moments which surprisingly all survived.

Today saw us reaching for the thermal vests as the day started grey, wet and windy. However, our sail to Dartmouth was surprisingly good, with the sun breaking through and providing almost Mediterranean blue skies. The overtaking porpoises were obviously on a mission too and didn’t stop to play.

We all moored on the mid river pontoon with a strong tide running, interesting moments. Then the sounds of dinghies being pumped up filled the air, until we realized that the water taxi was only 50p!

A convivial evening was spent in the Dartmouth Yacht club where we were joined by other CYC members also in the area, Xerades and First Light.

We motored up to Dittisham, a slow start but beautiful weather enhancing the lovely views. Interesting but slightly incongruous, armed navel cadets were busy practising patrolling the river.

There were plenty of mooring buoys available and only a short row in the dinghy to get to the Ferry Boat Inn or of slightly more relevance, a short row back after our visit to the Ferryboat Inn. It was a quiet night on the river and the sounds of the birds and the waves rocked us to sleep.

We awoke to the sound of the wind and rain and a forecast of 4 rising to 5 and gusting 6 at Start Point, hence rather agitated seas. To sail or not to sail, that was the question. The answer was no and the flotilla returned to Dartmouth mid river pontoon. Pell Mell suffered a minor oil leak and went into Dartmouth Haven for engine repairs. The day ahead was filled with a variety of activities, for some onboard, and others ashore which included retail therapy, rambling and watching England v S Africa (it’s an ill wind the rugby fans said) in a local pub which was occupied by our leaders’ old rugby club pals, touring in the west country, attired in some rather fetching outfits, tennis skirts and low-cut blouses seemed to be very popular. Graeme preferred not to discuss his rugby playing days.

Well, a busy evening was had by all starting with drinks on Rascallion, a curry in the town for some of us and a taxi ride (still only 50p) with the lights of the town twinkling over the water.

The following morning woken by strange sounds next to the boat which turned out to be the herring gulls dropping mussels on to the pontoons to smash their shells. And then fighting over the resulting snack. Interesting to watch but what a mess.
The weather was still problematic and nobody keen to round Start Point when it’s gusting 30 knots. So, another enjoyable day was spent in Dartmouth.

Today brought variable winds and a rather grey sky but the destination, Salcombe, was felt to be achievable. Pell Mells’ engine sorted, we were all able to continue. We waited for the tide and a collective start time decided. As the time neared there was a palpable tension in the air as crews made surreptitious glances around, towels disappeared from the rails as if by magic and yes, the infamous Chichester twitch was in action. Dawn chorus cracked first and were off and soon the pontoon was a veritable hive of activity as we all got under way.

As ever, Start Point was swathed in mist and there was quite a swell but never the less, we had a good sail and soon we were all moored up on the pontoon in the Bag and heading shore wards in the water taxi. We were joined by CYC members, Jubilate. They get everywhere – CYC members that is.

Woke up to wind and haziness but whoopee no condensation in the boat. The sea was very lively around Bolt Head with strong swells. Just the conditions which lead to the main halyard wrapping itself around the radar reflector so lots of deck work required to sort it out, accompanied by language of a particularly earthy nature, while the boat was behaving like a bucking bronco!

Luckily, all calmed when sails finally went up and with steady winds and reduced swell the beautiful coastline emerged as the haze started to lift. A grand sail to the entrance of the Yealm. For those of us new to the river, a keen eye was kept on the depth and leading marks as we motored up to Newton Ferrers. We moored together on the river pontoon with picturesque views down the river.

The evening was great fun, as after a meal aboard, we all gathered on Rascallion for drinks and sea shanties. Steve, on Coco, played guitar accompanied by a raucous choir. Never has ‘What Shall We Do with the Drunken Sailor been sung with such gusto and lots of Yo Ho Ho. Our neighbours on the nearby boats must have enjoyed it too, as the following morning they were very keen to know where we were going to next!

A misty, fine rainy sort of start to the day and we were free to do whatever. Charging batteries and then a ride in the dinghies to get provisions in the local coop followed by coffee and cake in the recently expanded café saw the chores done and then time to relax, read, ramble or just chat.

The pontoon party was not to be missed with lots of lovely nibbles prepared by the cruise leaders. A chance to reflect on the day’s activities and take anti scurvy measures, (G and T with a slice). Our neighbours were then treated to loud laughter and guffawing as joke telling activities commenced. It is strange that we didn’t meet any of them again, especially after all their kind enquiries as to our next destination.

Hooray! The day starts with brighter skies and even some sun. The river peaceful and quiet with the gentle coo of pigeons and the chirrup of sparrows, no wind though. We left for Plymouth and the Dandy Hole in good spirits.
What a beautiful anchorage with views of the countryside and the magnificent viaduct (designed by, who else, Isambard Kingdom Brunel).

We arrived on a rising tide and anchors to the ready, and the fun began. It was almost balletic as the boats circled around each other selecting suitable spots to drop the anchor, with hopefully the right amount of chain, and as some boats stopped, others re anchored, until finally all were content and crews waited and watched to make sure all was secure. Suddenly, 4 motor boats raced into the bay, massive wash and a huge burst of sound sent the birds swooshing up into the sky.

These naval cadets must have been more advanced than the Dartmouth lot and their activities far more exciting to watch. Boats chasing round the bay with all guns blazing, smoke bombs, much firing into the undergrowth and at each other. One boat surrendered and after hands up and a bit of shouting they all packed up and went off for tea or something. It was quite exciting and we didn’t even have to pay!

Meanwhile, wind shifts had moved the boats around a bit and boats were swinging different ways. Surprisingly, a couple were now bow to bow, twenty feet apart, others were too close to each other had to re anchor. The tide went out and we were marooned in a small pool of water not actually big enough for 7 and 2 went aground for a while. I’m sure Dawn Chorus grounded just to show us how to manage such a situation, should we ever find ourselves in the same position.

Awoke surrounded by mud. Lots of birds breakfasting and local buzzards getting short shrift from the gulls and rooks. On a rising tide the CYC flotilla took flight (this time, Dancing Deva was the first to twitch). A free day so Avalon and Pell Mell sailed to Fowey, Coco and Dancing Diva to Mayflower Marina, Dawn Chorus, Good Day Sunshine and Rascallion to Cawsands Bay where we anchored, hoping for a peaceful night. There, we all went ashore in the dinghies for dinner in the pub and the boats were still all there when we got back, always a bonus. After a fantastic starry night, we awoke, in the same place too– result!

We motored across serene seas, in bright sunshine accompanied by drifting jellyfish, and were united with the rest of the flotilla on pontoon Pil, in Fowey.

This was the end of our journey together. Fowey, a quaint seaside town with narrow cobbled streets, overlooking a large, busy harbour and famed for its pasties and cream teas, was a really delightful spot to finish in.

The end of cruise meal was at FYC, and we spent a great evening chatting over the last twelve days. The results of the quiz were announced. Avalon won by a short head. Wooden spoons to Good Day Sunshine and Pell Mell.

Graeme and Helen were presented with a bottle of West country gin for all their hard work in organising such a great trip and making it such fun.

A big thank you from Avalon of Hamble, Coco, Dancing Diva, Good Day Sunshine, Rascallion (cracking cruise deputies) and Pell Mell. This was an unusual cruise, and the idea of a rendezvous as a starting point might well catch on.

Can’t wait for the next one!