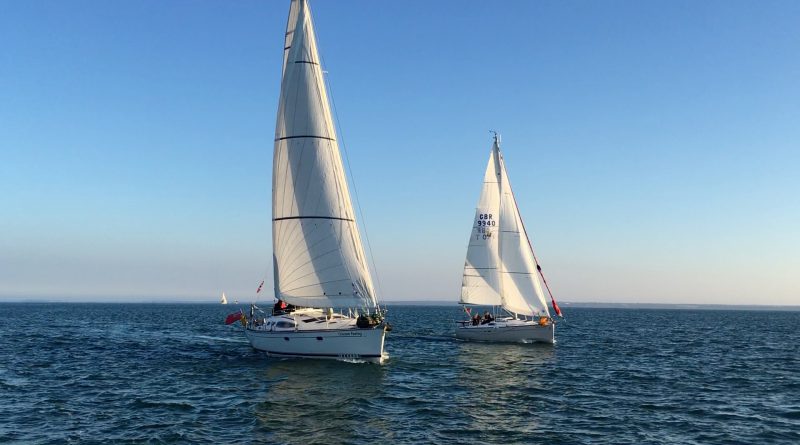 For the most part, this has been a fantastic summer – especially if you like the hot sunny weather that set in at the end of May and kept going for weeks. Some people have remarked that the wind never seemed to be going in quite the right direction, but isn’t that all part of the fun?

Thinking back to April, we held the Cowes & Back races – for the Peter Buttery Plate trophy. The weather then was a bit different! The six contestants started the race using the sense of hearing only – in thick fog – which persisted until we were beyond the Forts, by which time all was “normal”. The run back to Chi from Cowes the next morning was much better – especially for light boats, as there wasn’t much wind.

The six boats that took part were: Revelation, Kerenza, Raven, Crazee Feeling, Muddy Waters, & Serendipity – & on handicap, they finished in that order.

In early May, for the Bramidge, CYC fielded an excellent team of six yachts: Bugsy 2, Crayzee Feeling, Good Day Sunshine, Muddy Waters, Pell Mell, & Revelation against what we thought was a going to be very small CCRC team (based on the yachts that had booked on their website) but in the end, they turned up with 10 of their boats, & 2 guests.

The winds were light again that day, and CCRC won the competition, to retain the Bramidge Cup for another year! We all enjoyed the supper afterwards at CYC.

Next up was the Cross Channel Plate, for the trip to Cherbourg at the beginning of the RC’s Cruise on the 26th May. Variable winds led people to make the crossing on different days, so only 3 yachts registered a time & distance – to qualify for the “race” on the Saturday. Bugsy 2 out-sailed Crayzee Feeling & Kerenza to win the Plate this year.

The most recent event was “our” take on the Round the Island Race: the week after the real thing – and with a stop in Lymington overnight on Saturday. Three yachts took part (Crayzee Feeling, First Light, & Revelation), but for the first time, we had motor cruiser (Wavecrest) along – acting as “Committee Boat” & providing the starts on both days. Big thanks due to Robert & Jean, who did a great job; & hosted the “pontoon” party, too.

All three trophies for this event (the Cuff Miller; the Harding; & the RTI) were won by John & Jane Gosnell (First Light) – by virtue of being first sailboat to Lymington and only a few minutes behind Crayzee Feeling on the way home.

The detailed results for all these events will be on the Yachts noticeboard, & there may be a table accompanying this article.

We have one more “competitive cruise” to go – to Yarmouth & back – on the 8th & 9th September. There are spaces available, so please sign up – or contact me if you would like more information.