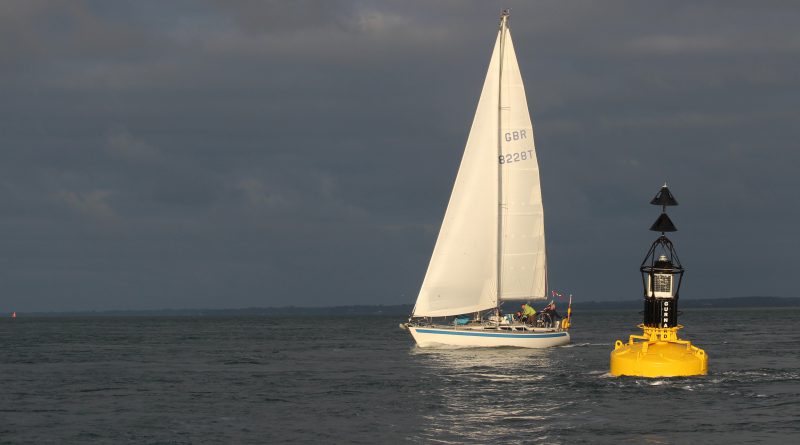 What a difference a year can make. Last year, only 2 boats made it to Yarmouth in pretty rough conditions. But this year, we had a splendid turnout: 10 boats registered; 8 boats turned up on the start line on Saturday; & the two that didn’t make it had very good “excuses” – so commiserations to Kerenza & Ursa Minor who didn’t make it out of Itchenor Reach.

Resonate was first to Yarmouth (& first on Leg 1 of the Ian Brunt Trophy) followed by Raven & First Light in 2nd & 3rd on corrected times. The rest of us followed.

Many thanks to all those entered this last fun-race of 2018; & for their excellent company once we were all ashore in Yarmouth.

In spite of the early start, I think Sunday proved to be a great sailing day: enough wind, a favourable tidal stream, and most of the other boats in sight for a good part of the trip. For Revelation, that lasted until Gurnard – where we were so preoccupied with watching Good Time Girl claw her way round the mark that we failed to react to the fact that we were going faster sideways than forward! Missing a mark is a bit of an embarrassment & I did consider taking another hour to drag Revelation back up-tide to have another go – in order to come last. But life is too short, so I decided to disqualify myself & try to catch the “fleet” as fast as possible.

With the benefit of the results in front of me, I can see that Resonate zoomed off in front, again. But for this downwind, down-tide run, she didn’t get far enough in front of the rest of the fleet to win outright, I’m afraid. All the other 6 boats crossed the line within less than 1/2 an hour from first (2nd) to last!

The overall results will be in October’s magazine, but congratulations to: Resonate – for 3rd overall; First Light – for 2nd overall (but only by a technicality – apparently 1+4 beats 2+3) from; Good Time Girl – in First overall (& winner of the Ian Brunt Trophy). Well done Kevin Brown & crew – on your first outing with us. Will you be back for more next year?

In fact, it would be great to see any of you on next year’s fun-races.