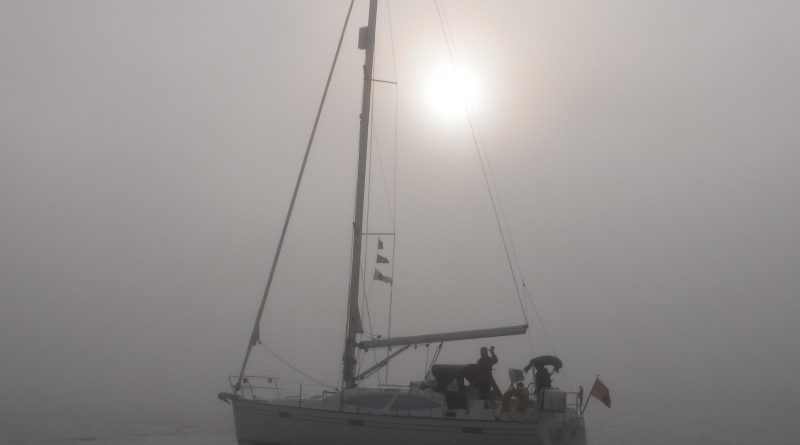 A most enjoyable cruise, let us elaborate :-

As the cruise name suggests there was to be some Magic and some Mystery involved and Peter and Marion did not disappoint us !!

The pontoon party / briefing was held in a marquee where Peter and Marion supplied lovely “retro” nibbles, hot and cold, and a Beatles music compilation to set the mood and emphasise the theme of the cruise. During the evening there was much laughter and chatter with a bit of detail added by Peter on where we were going next and Marion on our cruise task / competition / memory test for the week – namely a list of 50 anagrams of Beatles songs to solve. Some of us continued to the Castle pub for dinner.

Tuesday the weather stayed warm and calm giving us a gentle sail to Cowes and on to Island Harbour for the afternoon and night. During the afternoon some crews walked into Newport, while others tinkered with boat issues [Peter had a Heads problem – of the Loo kind, not the brain kind I might add !!]. The evening meal was in The Breeze restaurant which involved good food and company with more chatter and laughter plus details of our next destination – Yarmouth.

Wednesday. Gill and I were the first to leave at 1030 and again the weather was warm and hot but with very little / no wind so we motored to the entrance of Newtown Creek where we dropped anchor, had lunch [and a swim for Geoff] before continuing to Yarmouth.

All the other boats had arrived and most, having departed an hour or so later, managed to find some wind for a pleasant trip to Yarmouth under sail. Lesson learned – early bird gets a swim, later bird stays warm and has a nice sail !! Tea and biscuits were provided for us by Beryl onboard Avalon – a very nice welcome, before a quick trip into the town.

The Royal Yarmouth Yacht Club was the venue for drinks this final evening and it did not disappoint: lovely sunset, beautiful views and comfortable surroundings. A final update from Peter and the results of our Beatles brain teaser were revealed by Marion. Well done to the winners Steve & Cathy who just beat David & Gill and Tim & Beryl after a tiebreak question.

The weather was forecast to be cooler with NE winds on Friday and some people had to return on Thursday. So it was decided, after consultation, to head back to Chichester on Thursday rather than extending the cruise further. News of a rally with 50 boats arriving also helped that decision!

Thursday. The forecast was for light winds, fair weather and good visibility. Well the forecasters got one aspect right – light winds. We slipped away at 0700, as planned, to make the best of the East going tide, visibility only about 100m at best, once outside the Harbour this dropped to about 50m. Others departed a bit later, for various destinations, but still in poor visibility.

(The fog added an extra mystery as, once again, we didn’t know where we were going!)

At 1100 with Ryde to starboard the fog eventually cleared revealing blue sky and warm sunshine again, but still no wind so we motored to East Head dropped the hook, had lunch and a snooze before returning at 1400 to Chichester Marina.

Now I haven’t mentioned the “Magical” bit – well that must have been the warm weather [until Thursday] the “Great Effort and Organisation of Peter and Marion” and the “Warm, friendly company provided by all the other crews.