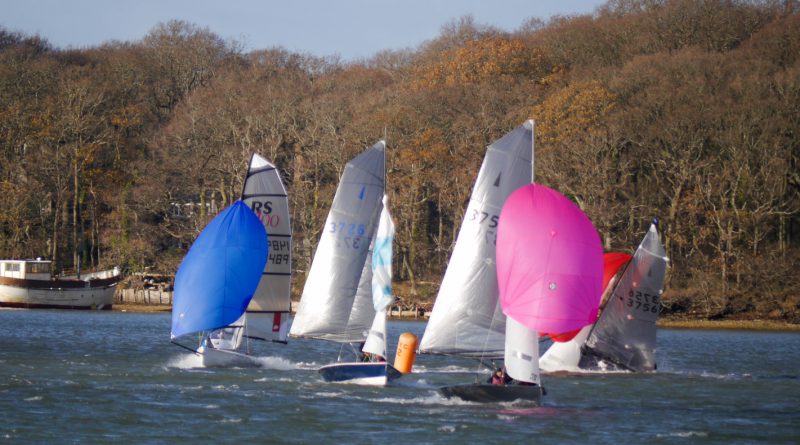 The final day of this years frozen toe series was forecast to have strong winds decaying through the day. The Race officer and race committee exchanged many emails over the weekend trying to decide whether to go ahead with the event. In the end, the morning wind was lower than feared but more than enough for an exciting sail.

Due to the forecast  the number of competitors was lower than previous weeks, but not surprisingly a healthy number of Merlins chose to sail.

The race officer, Martin Orton, assisted by members of the CYC Solo and Laser Fleets, laid a trapezium course with the committee boat close to the marina, and the windward mark close to the shore on the west side of the lake. Fortunately, the wind fixed on a Westerly direction, giving the racers a relatively long beat, and avoiding the trees on the far bank which cause the wind to shift.

In race 5, the fast fleet were quickly up the beat and launching spinnakers on the reach. There were a number of early capsizes as the helms struggled with the gusts. On the downwind leg, the helms were all hanging over the transum of the boat to lift the bow and minimise drag. The RS400 sailed by Steve and Sarah Cockerill was especially quick on the downwind legs, with some spectacular gybes, they built a lead over the chasing Merlins. Unfortunately on the last lap, they suffered a catastrophic failure, when their mast broke in two just above the spreaders. Impressively, they managed to control the boat and sail it back into the beach with a safety boat flanking them.  The race was won by Tim Saxton and Holly Scott from Itchenor SC.

In race 6, the remaining fleet was further reduced such that only four boats finished, with another merlin from Itchenor taking the prize sailed by Neale Jones and Isabel Fitzgerald.

In the Medium fleet there was some impressive sailing and more than a few capsizes, including on one downwind run a gust caused a Devoti D-Zero to pitch-poll (the sailing equivalent of a forward summersault). At the end of the day Felpham’s Liam Vass had taken both races in his Aero7. In the first race Ian and Sarah Yardley took second in their 2000.

The Slow fleet was reduced to two boats, who battled their way around a slightly smaller triangle course. Felpham’s Alfie Lester took both races, followed by CYC’s Ollie Randall-May.

After the races were completed, and the sailors had recovered with mulled wine and mince pies, CYC’s rear commodore, Alastair Jenkin conducted the prize giving.

In the Medium Fleet, 27 competitors had taken part in the series, but the winners were Iain and Sarah Yardley, followed by Liam Vass and in third place Toby Schofield. The highest placed CYC sailor was Ian Payne in fourth place.

In the fast fleet, Steve and Sarah Cockerill took the series despite their breakages on the final day, followed by Jack Holden and Tom Harrison in thier Merlin and in third place Neale Jones and Isabel Fitzgerald.

CYC Award an overall prize to the winner of the series using a formula that requires a complex spreadsheet to calculate. After some technical problems, the cyc computer decided that the overall winners of the Frozen Toe Trophy 2018 were Iain and Sarah Yardley from Silver Wings SC

Full results and many more photographs are available on the CYC Open Meeting results page.