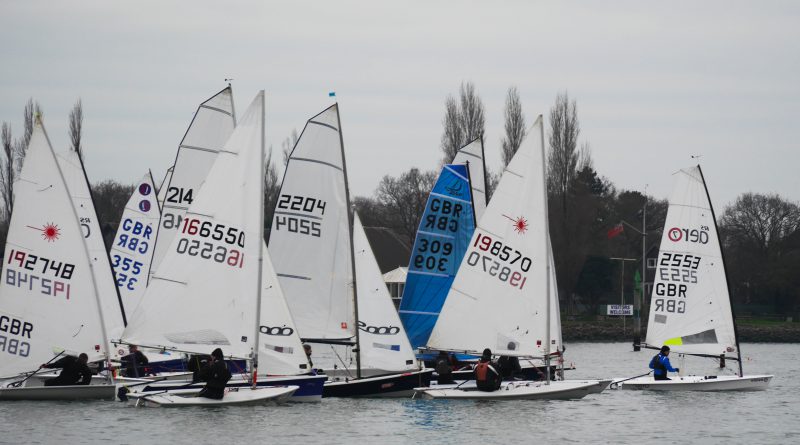 The first event of the 2019 snowflake was greeted by a grey overcast day with winds hovering between 5 and 10 knots. Even so 53 boats arrived at the club to kick off our 2019 racing calendar.

The CYC Snowflake Series 2019 is sponsored by Aqualiving.

The race officer, Peter Harrison, set a trapezium course with an outer loop for the fast and medium fleets and a shorter trapezium course for the slow fleet. In light wind the benefits of clean air are even more important so the start line was very congested with so many boats trying hard to get into the clean air. In race 1, the fast fleet got away cleanly, but the medium fleet needed a general recall before they could get away.

The 21 boat Fast fleet had a good mix of Merlin’s, RS400’s, Blazes plus a couple of visiting International 14’s from itchenor. The enormous kite on the 14’s made an interesting comparison to the other boats.  The first two places were shared between Steve & Sarah Cockerill’s RS400 and Ben & Ros McGrane’s Merlin with a win each.

The 25 boat medium fleet was made up of Solo’s, Lasers, and Aero’s with a small group of double handed 2000’s and a GP14. In race 1, Alex Butler’s Solo took first place followed by Nigel Thomas also in a Solo. In race 2, the Aero’s took the top two places, with Mark Riddington winning and Toby Schofield taking second. After the two race results were combined Mark Riddington held the top of the table, with the two Solo’s close behind.

The 7 boat slow fleet saw CYC’s Thomas Machell take the first race in a Topper. The Second race was won by Samuel Atherton in an RS Tera Pro, followed by Charlie Gran and Zac Smith.

Full results and photos are available on the CYC results page.

The Next Snowflake is on the 20th January.