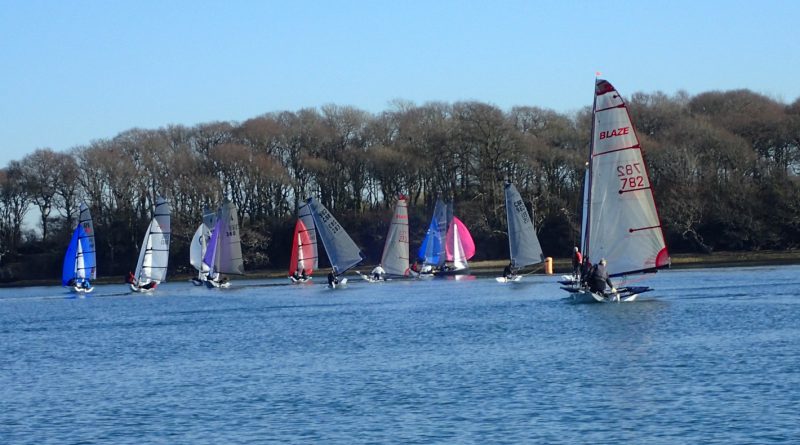 Chichester’s Snowflake 5&6 required an early start for the 26 competitors. With temperatures showing -3C as they arrived and very light wind forecast, it was not very surprising that the numbers were down on previous weeks. Those that braved the cold weather, were welcomed by a glorious bright blue sky and a low sun which made the harbour look fantastic.

As the boats launched, they had to break through and area of ice close to the marina lock, causing the boats to make loud crunching noises as they made their way to the start line.

The Race officer Phil Allen, set a relatively long course that took the competitors anti-clockwise around the lake.

In the fast fleet Alex Jackson and Will Carroll from Shoreham took the first race, from Alex Warren and Mary Henderson both sailing Merlin Rockets. In the second race the tide had turned causing the race officer to warn the competitors to avoid being pushed over the start line. The Second race was won by Alex Warren and Mary Henderson, followed by Steve and Sarah Cockerill.

The medium fleet was made up of Solo’s, Aero’s, lasers, 2000’s and a Devoti. The conditions were not good for the asymmetric 2000’s, with the single handers making more of the light wind. Race 5 was won by Nigel Thomas from Hill Head SC, followed by Mark Riddington from Emsworth Slipper SC. In race 6 Stephen Holcroft from Dell Quay won followed by Alex Butler from Hayling Island.

After 6 races the leaders of the fast fleet are Steve and Sarah Cockerill with 6 points, followed by Alex Warren and Mary Henderson tied for second place with Alex Jackson and Will Carroll.

The series leaders in the medium fleet are Alex Butler followed by Nigel Thomas, then Mark Riddington.

The final event in the Snowflake will be on 24th February (1:30pm start) and will be followed by prize giving.

Full results and Pictures are available on the CYC website