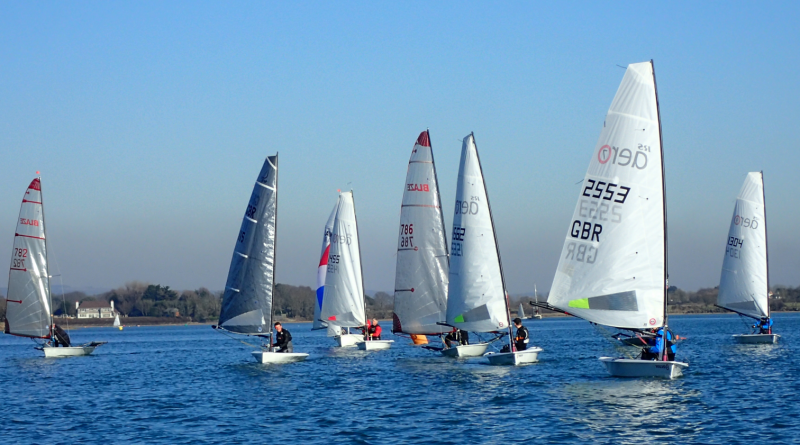 After the -3C icebreaking of races 5&6, the final event in this years Snowflake couldn’t have been more different. With the race due to start at 13:30, the competitors had a leisurely arrival for a very spring like day at CYC. With the temperature easily in double digits and a bright blue sky overhead, many of the competitors were undecided whether to put on winter gear or shorts.

The race officer Richard Anderton, set an east/west trapezium course that had the boats beating up the marina channel toward the clubhouse.

On sunday, the fast fleet had 24 competitors with the Merlin Rockets and RS400’s out in force. In race 7, Tim Saxton and Holly Scott won by 4 seconds after the handicap had been applied, with Steve and Sarah Cockerill not quite able to build enough of a lead for their RS400’s to overcome the Merlin’s more favorable handicap. In race 8, the wind freshened slightly and allowed Steve and Sarah to win by a convincing 2 minutes from the closest Merlin sailed by Alex Jackson and Will Caroll.

The Medium fleet had a healthy 21 boats with the font of the fleet contested between Solo’s and Aero 7’s. In race 7 HISC’s Alex Butler won in his Solo followed by Mark Riddington and Toby Schofield in Aero’s. Martin Orton sailing with Ian Brooks managed a very creditable fourth place sailing in a 35 year old Lark. In race 8 the top three places were unchanged, but fourth place went to Charlie South who went on to win the overall Youth prize for the snowflake series.

In the Slow fleet four boats had close racing with just a minute separating them after the times were corrected for handicap. The Winner was Zac Smith in his Quba, followed by Sam Atherton in a Tera and Katie Merryfield-Day and Joshua James sailing in Toppers.

After the racing the competitors gathered in the sloop for the end of series prize giving. Prizes for the leading boats were awarded by the Snowflake Sponsor, Aqualiving of Chichester.

The winners of the overall series were :