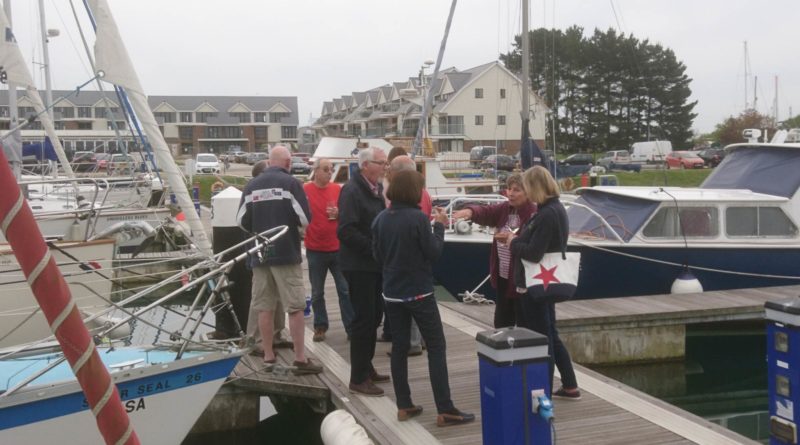 Easter Monday was bathed in beautiful sunshine as we sailed out of Chichester on our way to Premier Marina Gosport to Rendezvous with our friends Geoff and Gill on board Gilli-Anne.

It was a very pleasant sail, with a light wind on the beam, arriving at Gosport early afternoon. We were able to moor up alongside Gilli-Anne which was convenient. We met up for drinks and supper at The Castle Tavern, where we enjoyed a very tasty meal , and were joined by Cliff and Anita who had also sailed up a day early in ‘Topsy’.

On Tuesday we set sail for Island Harbour I.O.W. This proved to be a very sheltered and pretty little marina, where we were welcomed by Christian the lock keeper who is a very friendly and pleasant chap.
The other boats on the Cruise gradually joined us during the afternoon. Six boats in all, Gilli-Anne, Serendipite, Dawn Chorus, Topsy, Teise, and Sea Lion. We enjoyed a very jolly Pontoon Party in the early evening, before the rain set in, and then retired to The Breeze Restaurant for our evening meal. Geoff and Jill had devised a conundrum for us all to solve, which proved to be particularly tricky after the consumption of a few bevvies, however Graheme and Helen managed to provide the answer in the end.

As the weather forecast was not looking quite so favourable for the remainder of the week, Geoff suggested that our next port of call should be Cowes rather than Yarmouth! So after a very short hop up the River Medina, we moored at Shepards Marina, where some of us enjoyed a relaxing afternoon exploring Cowes. We then all met for a drink at the Island Sailing Club (fabulous view), followed by dinner at the Union, which was delicious.

After our Goodbyes on Thursday morning, we set sail for home in a very lumpy sea. (The wind had been very strong on Wednesday night, and stirred things up somewhat). We were very relieved to see West Pole loom into view after a couple of hours of rocky swell, and pass over the Bar into Chichester Harbour and calmer waters!

Many thanks to Geoff and Gill for organising a lovely few days cruising. It was great to meet up with some old friends, and have the opportunity to make new ones too.

– by Sally and Chris Knight (Serendipite)