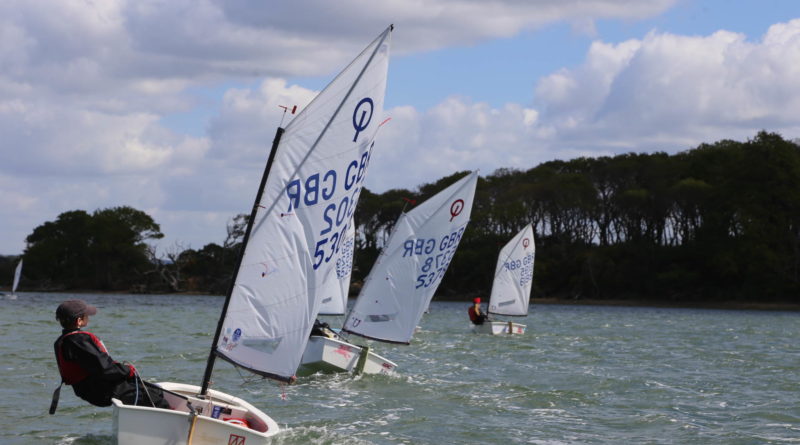 The 2019 CYC Optimist Open saw almost 50 young sailors descend on the harbour to test their skills.

Race Officer Derek Jackman set a trapezoid course, for the Main Open Fleet, which gave the opportunity for some exciting downwind sailing but was hard work up the beats for all the sailors.

Sam Watson from Emsworth Slipper SC showed his mastery of the conditions by winning all three races but his brother Luke chased him hard all the way finishing second overall.

For the less experienced sailors, the Rooster Regatta Fleet Series event provided opportunities for the 30 competitors to develop their racing skills. The wind strength was a real challenge for them with winds up to 25 knots but they coped with the conditions with great courage and tenacity. The wind was strong enough for some exciting planing on three downwind legs of the course.

In the first race, Tom Saunders from Warsash SC led the first lap but his clubmate, Tom Peace recovered from 7th, after a poor start to take the lead in the second lap.

After a break ashore, to allow a severe squall to pass through and giving the sailors time for lunch, the second race started with Joe Armstrong Roland of Royal Southern YC showing very quickly out of the start and maintaining superior boat speed, on all legs of the course, to build a substantial lead through the first two laps.

However, a period of very strong wind found him in difficulties on the third beat and Tom Peace came through to win again. There was considerable place changing in this race, with Barney Bromilow from Parkstone YC coming through to second, after his fourth in the first race, followed by Tom Saunders at the finish.

Overall, Tom Peace won with Barney Bromilow second and Tom Saunders third. The tie on points between Saunders and Leigh-Anderson was settled by the results in the last race.  Jake Teece of the home club, CYC, sailed consistently well to finish fourth.

Commenting on the event Stewart Grant, CYC Optimist Captain said, “We were all very impressed with the resilience of the fleet in challenging conditions and the healthy level of competition.  They certainly deserved the mountain of cakes and goodies they demolished at the sailors tea.”