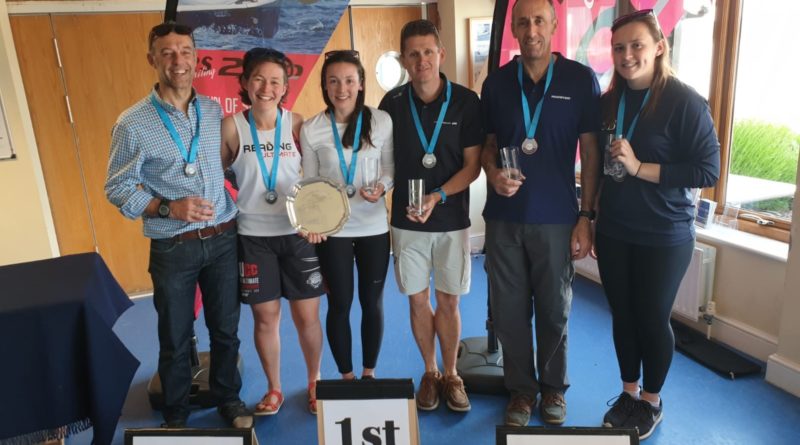 With a forecast of a maximum windspeed of 4 knots and a predicted shift of 180° it didn’t bode too well for the 2000 open at CYC on Saturday 18th of May, giving the Race Officers something of a challenge to set the first course.

With a simple windward mark and leeward gate and prompt setting out of the marks by the safety boats race one started pretty much on schedule with all 14 boats clearing the line.

The wind stayed very light, so only two laps were possible within the race duration; the first three placings were consistent throughout the race which was won by 2321, Jasper Barnum and Serena De Nahlik of Snettisham Sailing Club. 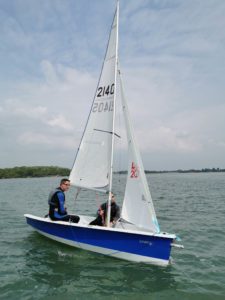 Despite the course change race 2 posed even more of a headache with the wind shifting constantly, as forecast, in the run-up to the start sequence, and dying to practically nothing after the start. Four boats had individual recalls but eventually made it over the start line. The race was shortened to one lap but all boats eventually finished. Boat 22334, Simon Horsefield and Katie Burrage of ASA took first place by a considerable margin, mainly due to a smart manoeuvre at the windward mark.

After a 45 minute delay to wait for the wind to fill and shift, Race 3 made it all worthwhile! With the wind increasing to 6 to 7 knots the final course change paid off with a crackingly competitive race between the 11 boats that had waited patiently. The fleet divided loosely into two groups with places changing frequently within these over the full five laps, depending mainly on choices made on the beat to the windward mark. Race 3 was won by 22334 (Simon Horsfield) despite dropping to third position in lap 3.  Jasper Barnum and Serena were second, Rob and Sarah Burridge third.

The first CYC boat was Helen Green and Nick Berry.