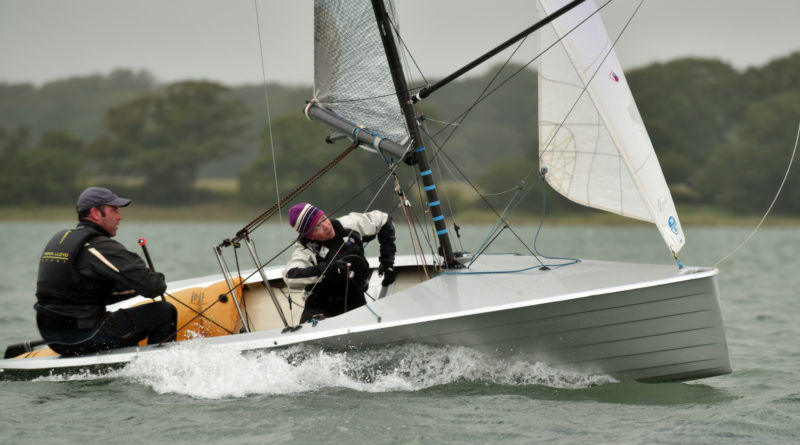 The regatta at Chichester Yacht Club provided some exciting racing for those brave enough to participate. With winds gusting to 26 knots it was decided not to send the fleets on the traditional long courses, down towards the Harbour entrance, and instead it was set for several laps between Longmore point and Dell Quay.

Steve and Sarah Cockerill, from Stokes Bay SC, gave a masterly display of heavy weather sailing in their RS400 winning the Fast fleet by a considerable margin from the RS400 of Nick and Roger Elliman from the home club. The Merlin Rocket of Chris Grosscurth and Emma York showed how to go downwind with a symmetrical spinnaker in such a powerful breeze and finished third on handicap. Not content with their victory, Steve and Sarah finished their day honing their gybing techniques in the strong wind!

In the Medium fleet, Nigel Cowan had an exciting time just staying afloat when a hatch came loose on his Hadron H2 leading to a spectacular sinking. Meanwhile, Ian Payne was navigating his Laser fast and safely without capsizing to take first place in the Medium fleet after strong competition from a new duo of Charlie Elliot and Will Dodd in a 2000. The different downwind techniques between the single sail Laser and the three sail 2000 were demonstrated on the long run from Perch to the Quay mark where the Laser could sail straight downwind while the 2000 was forced take a more exciting route make several risky gybes but frequently obscured by flying spray.

Thomas Machell in his Topper showed impressive speed and boat handling in the heavy conditions to win the Slow fleet.

Four X One Designs ventured out from Itchenor SC as part of the Regatta but, sadly, were unable to race through Itchenor to finish at Birdham in the strong wind and so finished on the Gallon line west of Itchenor. The winner was X50 Roger Yeoman, Mike Moss and Rob Tyrwhitt-Drake. Second was X172 with David MacLean and Ras Turner with Michael O’Donnell ands Steve Lawrence.

Competitors enjoyed a well earned Regatta tea of cakes and sandwiches provided at the end of their energetic day.

Full results are available on the Open Meeting results page.