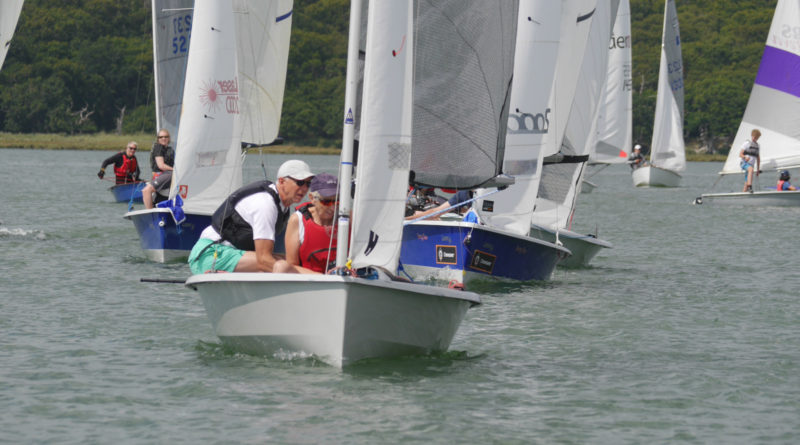 CYC’s dinghy week started on Wednesday with a “blow the cobwebs off” force 5. The lake area was full of boats, with the “start to race” coaching courses being closely monitored by their instructors, and the beginners enjoying some fun in the sheltered areas near the beach. The Race Fleets were set a trapezium course with the fast fleet an additional mark to extend their course. During the second race the wind was enough to cause a few capsizes and early retirements, but with 5 days of sailing, BBQ’s, Quiz’s and Disco’s its better to pace yourself.

By contrast Days 2 and 3 had light wind, with at times the weak northerly wind cancelled out by the sea breeze to leave the fleet stalled waiting for the wind to re-appear from a totally different direction. Who would want to be a race officer on such a day!

By the Saturday the wind was better behaved allowing a 37 boat fleet swelled by sailors joining for the weekend to have two good races.

Dinghy week was again supported by an army of volunteers who manned the committee boat, safety boats and tea bar, it was great to see so many dinghy members enjoying the week.

The Results for the Dinghy Week Race series were as follows :

Full results can be found on the CYC Website.

Its traditional in Dinghy week to have a pursuit race on the last day, allowing the previous four days results to be confirmed before prize giving. This year the pursuit race was the highlight of the sailing week. With a perfect force four south westerly wind, the race officer,  Nick Colbourne set a long course with many beats and runs in the southern half of the lake to avoid the youth turbo regatta being held in the northern half. With many yachts queuing for the marina lock, the choice of which way to navigate the traffic was an important tactical decision. After the racing it seemed that everyone had had a personal dual with another boat, with lots of overtaking.

When the hooter went at 1600 to signal the end of the race, the Mirror sailed Allan Bennett crewed by one of his granddaughters  (Ellie and Isabelle) had managed to hold of the pursuing boats, with even the speedy Merlins, RS800’s and RS400’s not managing to make up the distance to overhaul him. Second place went to Pete Harrison sailing his Foxer.

At the prize giving a prize was awarded to Lucas Sproul as the youngest helm in the main fleets.

A regular feature of recent dinghy weeks has been the “monkey and back in a reasonably priced topper” event were individuals compete to race a topper to the Monkey buoy and back in the fastest time. This year the much coveted Hamish Scott Trophy was won by Charlie Elliot.

Many more photographs from Dinghy week can be found in the Dinghy Week Photo Album.