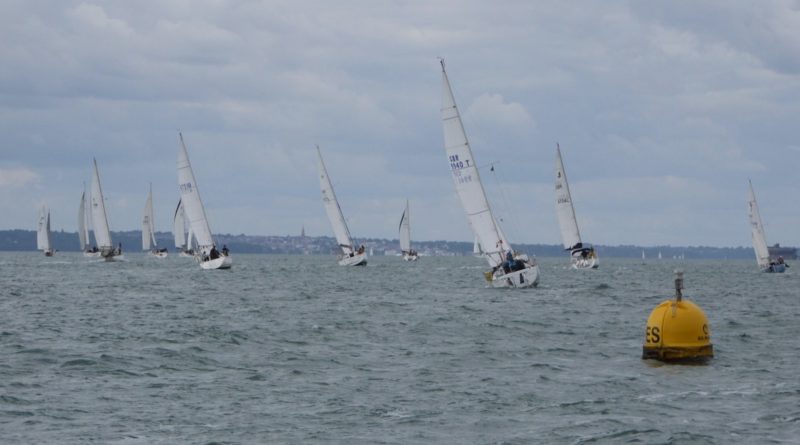 On the 7th September, unusually late in the year to be running the Bramidge Trophy, a record 10 CYC yachts headed out into Hayling Bay to meet with CCRC who take on the race organisation for this event each year. From here, I can let the CCRC Commodore take up the story:

Saturday saw some 30 yachts gathered on the start line for a single race but with numerous results to be calculated. CCRC was racing in an inter-team race against Chichester Yacht Club, and separately against Channel Sailing Club. Then there were to be the normal CCRC handicap results and an overall result for each boat. Something of a challenge for the Results Officer!
The weather was excellent with a little sun and a gentle northerly breeze; though that breeze had frequent shifts and gusts to keep us all alert. With the number of boats and a reliable breeze the Principal Race Officer was able to set an excellent course which after an initial short-ish upwind leg, took us on longer down-wind legs south-west to Winner and then along the shipping lane to Horse Tail and New Grounds before a long beat back to Rizzi and finish at Chi. The Race Officer ably handled the start and finish with the number of boats which included many we were not familiar with and/or had no sail number. It was three hours of enjoyable sailing where each wind shift or adjustment showed whether you were gaining or losing against your competitors
After the race we headed into Chichester for a sociable drinks and excellent supper at Chichester Yacht Club before the results were announced and trophies awarded. CCRC won the Wooden Spoon trophy against CSC; while CYC won the Bramidge Trophy (after a “recount”) against CCRC.
Altogether an excellent day.

So whilst we all thought that CCRC had retained the Cup for another year, it turns out that following a review of the complex individual and team handicapping calculations, CYC were declared to have won, after all. The Bramidge results story & individual performances can be seen in the Results Table below: