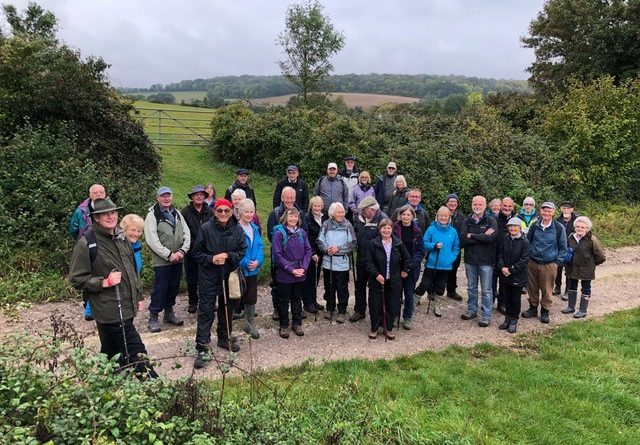 An intrepid 35 set out on the climb from the Barley Mow to the ‘humps’ at the summit of Kingley Vale. Only a few were deterred by the forecast of constant rain! The rain held off and half way up the climb we were rewarded by some fine views of Chichester harbour and people tried to identify landmarks from this unusual viewpoint. When we finally got to the humps, a series of ancient burial mounds, we took a break for refreshments but sadly the misty rain had closed in and all we could see were the Belted Galloway cows which are used to maintain the moorland. Apparently, they are sometimes called ‘Oreo’ cows due to their resemblance to the biscuit! We then made our way down the hill pausing at a memorial for a Polish airman who crashed his Hurricane in that field during the Second World War. Some of us took an easier route along the road back to the pub while the main group took a route along the Monarch Way which, at 615 miles, is based on the route taken by King Charles II during his escape after defeat by Cromwell 1651. Finally, we had a very sociable meal in the skittle alley of the pub. We were pleasantly surprised that the weather was much kinder than forecast.