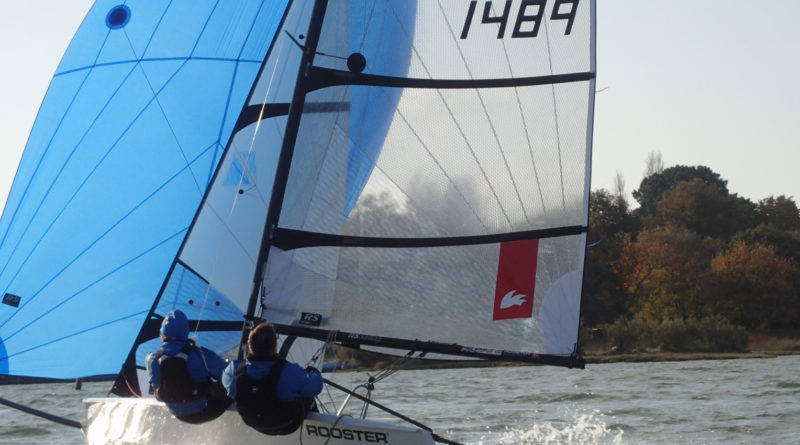 With many of the CYC competitors still recovering from the Saturday nights annual prize giving dinner, the early tide forced the competitors to set unwelcome alarm clocks so they could arrive at CYC in time for the 0830 briefing. The Race officer for the day Nick Colbourne explained that the three fleets would be sailing a trapezium course with the committee boat beside Birdham Marina and a beat to the North towards copperas. After the high winds and torrential rain of previous days, Sunday was a beautiful bright morning with wind in the 12-18Knot range, perfect  for the start of the winter series.

In the Fast fleet 16 boats competed, with Steve and Sarah Cockerill starting the 2019 series with a clean sheet of two wins. In race 1 they were followed by a two boat tie of a Merlin sailed by Tim Saxton and Holly Scott and an RS400 sailed by Jack Holden and Mark Oakley, with both boats sharing the points. In race 2, Tim and Holly managed to hold the gap between them and the RS400 so that they could claim second place after the handicap was applied.

The Medium fleet was well attended with 17 boats from Felpham, CYC, Itchenor, Dell Quay and Silver Wing SC.  In race 1, there was a tie for first place between the 2000 of Iain and Sarah Yardley and the Supernova sailed by James Gerwat. The Supernova was fastest around the course, but its superior handicap resulted in the slightly slower 2000 having the same corrected time. In race 2 Iain and Sarah built a win by over a minute  from the Aero 7 sailed by Richard Bentley.

It was very encouraging to see a healthy slow fleet racing with 9 boats enjoying the bright conditions. In race 1, Thomas Machell won sailing his Topper, followed by a pair or Mirrors. Effie Grant helming with Mum Sarah, managed to hold off Bas Bush helming with Dad Clive.  In race 2 Chester Banton in his Topper won with Zak Smith second and Thomas Machell Third.

The Next frozen toe at Chichester Yacht club is on the 17th November, all dinghies are welcome to join in this Open event. Registration will be in the Sloop from 10:45, with the first start at 12:45.

Photographs from the series are posted here : https://www.yogile.com/cycft2019#21t