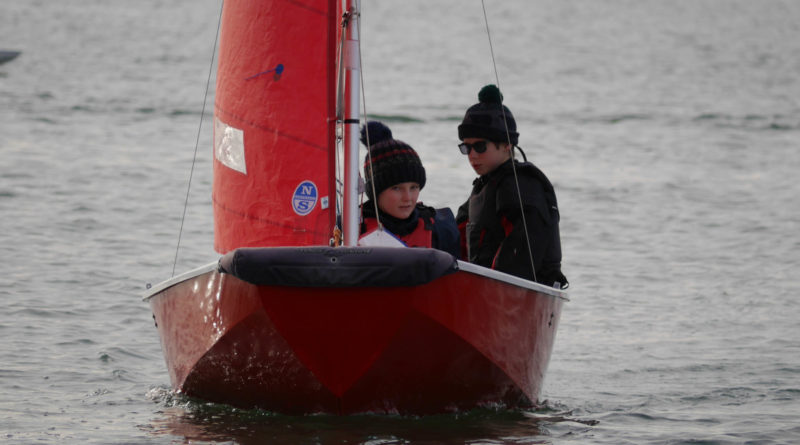 CYC held the second of its frozen toe winter series on Sunday. The tide times allowed the competitors a good lie-in as racing started at 1245. The temperatures were notably cooler than the week before, with a northerly direction to the wind.

This weeks race officer, Pete Harrison, set a trapezium course from just north of the marina channel up toward dell quay.

The racing in the fast fleet was very close for the race 3, with the RS400’s covering each other. The 400 of Jack Holden and Mark Oakley, got ahead of Steve and Sarah Cockerill at the leeward mark, then worked hard to defend their lead. They were very close on the beat, but the approaching shore forced an extra tack from jack which Steve managed to avoid giving them back the lead. Steve and Sarah went on to win races 3&4 to maintain their clean sheet. Jack and Mark took second with John and Charlotte Fildes in their bright blue new Merlin Rocket third.

In race 4 Steve and Sarah led from the start, with Jack and Mark Second and Tom Sully and Alicia Stephenson in their RS200 finishing ahead of the Merlin after their elapsed time was adjusted for handicap.

The Medium Fleet had five Aero’s, four Solos, and only two Lasers in the 16 strong fleet.  In race 3, CYC’s Ian Barnett in his Solo was both fastest over the water and clear winner on handicap, he was followed by Sophie Bentley sailing an Aero 5 and Ian Lissamore in a Solo. In race 4, it was a close race over the water between Ian and James Gerwat sailing a Supernova, with Ian’s Solo handicap giving him his second win of the day.

The Slow fleet had thirteen competitors in a mixture of Mirrors, Toppers, Laser 4.7s and Byte C1s. After the Handicap was applied Race 3 was a Mirror 1,2,3, with CYC’s Bas Bush finishing ahead of Effie and Sarah Grant, with Itchenor’s George and Camilla Bullock finishing third. In the fourth race, the Mirror results were reversed with George and Camilla taking the Win. The Byte C1 sailed by Felpham’s Paula Bentley squeezed in between the Mirrors to take second place.

There are two more dates in the Frozen Toe Series on the 1st December and the 15th December, all are welcome to join in the series.

Full Results lots of Photographs from the Frozen Toe are available here.

For future planning, after Christmas, CYC has its Snowflake Series, the first event is on the 12th January.